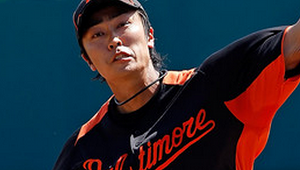 At the outset of posts like this, I frequently reference a previous post where I mentioned the player that is the subject of the present post. I do that not so much to pat myself on the back for having incredible and handsome foresight, but instead because I’ve often dug into concepts previously that I want to make sure to reference this time.

So it is with free agent pitcher Tsuyoshi Wada, whom the Cubs have signed to a minor league deal with an invitation to Spring Training, per Sponichi (and Google Translate). When the Baltimore Orioles declined his option back in October, I wrote this:

Early possibility (among many) for a pitching flyer via a minor league deal? How about lefty Tsuyoshi Wada, who came over from Japan before the 2012 season to some fanfare (some … not a lot), only to promptly undergo Tommy John surgery? He spent the 2012 season rehabbing, and then the 2013 season working out his arm at AAA. The Orioles just declined a $5 million option on him, making him a free agent. He’ll be 33 next year, so there are some years in the tank. Just a flyer type here, but maybe something worth keeping an eye one.

It *was* something worth keeping an eye on!

That quoted bit sums up much of what there is to say on Wada. He pitched sufficiently well in his years in Japan that, when he became a free agent, the Orioles gave him to a two-year, $8.15 million contract. While not the kind of deal you’re going to see Masahiro Tanaka get, that’s a healthy sum for a second tier starter from Japan, making his stateside debut.

In other words, before coming to the States and immediately requiring Tommy John surgery, Wada was well thought of. Getting him in on a minor league deal and a chance to see if he’s full recovered from the surgery is a very nice get. He threw a hair over 100 innings at AAA last year, posting a modest 4.03 ERA, 3.1 BB/9 and 7.0 K/9.

When it comes to that 7th/8th/9th starter range, this is the kind of guy you want to see in the mix: theoretically steady, might not kill you if he gets the call, and a little bit of upside.