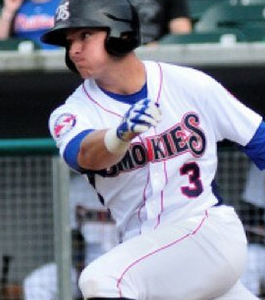 It took him 189 games and very nearly 800 plate appearances in High A before it happened, but in June of 2013 outfielder John Andreoli finally got his promotion Double A. He kept right on producing.

Now that we have a good idea what Andreoli can do in Double A we can start to refine the projections on him and pin down just what kind of a prospect he is. We already knew that Andreoli was a quality guy to have in the organization, but now he looks very much like someone I think will have a major league future, possibly even a bright one.  How bright?

We’ll dig into that after we cover the basics. The goal here is not to re-rank the prospects (that comes next year) or to assess the strengths and weaknesses of farm as a whole (that also comes next year). The goal for this series is to take each prospect individually, study the progress made so far, and see what we can learn about the future for that player.

If you are looking for candidates to make a surprise appearances in the majors this year, Andreoli might be your dark horse.

John Andreoli, OF
Born: June 9, 1990
Acquired: Another member of that impressive 2011 draft class, the Cubs picked Andreoli in the 17th round out of the University of Connecticut.

I honestly think the only thing holding Andreoli in Daytona so long was the presence of Jae-Hoon Ha and Matt Szczur, both similar players, in Tennessee. About the time the Cubs moved Ha to Iowa they finally gave Andreli the ticket to Tennessee. In that lengthy stay with Daytona, spread across two seasons, Andreoli put up a combined slash line of .300/.399/.388 with 78 steals and one home run. If we were going to wish for anything, looking at those numbers, it would probably be a little more power.

He posted a SLG of .405 for Daytona in just 2013 (up from a .376 in 2012), but I think the more notable positive news is that in 59 games and 226 plate appearances at Double A the Andreoli hit .289/.358/.398 with 17 steals and two homers. His doubles total for Double A (12) exceeded his total for 2013 High A (11) despite having played eight more games for Daytona. That suggests some ballpark and league effect depressing his High A power numbers. He still isn’t a slugger, but I don’t think we need to worry about Andreoli having difficulty getting the ball out of the infield.

What Andreoli does do, if you had not picked up on it already, is get on base and make things happen with his legs. His Tennessee OBP of .358 was good for 26th in that league, and many of the 25 who surpassed him were a fair bit older than he was. For his minor league career he has 98 steals in 123 chances and 16 triples in 258 games. It is pretty evident that once he reaches base, he has a the ability to make things happen.

Add it all up and we find a Double A wOBA of .350 and a wRC+ of 122, and a Tennessee line that was pretty even against both right and left handers. Those aren’t future All-Star numbers, but they are the numbers of a guy who probably has a major league future.

As far as the glove goes, I’m not worried. He can handle any of the outfield slots.

So long as you keep your expectations modest, there is a lot to like with Andreoli. While I do think he has a major league future, if only as a fourth outfielder, I don’t see stardom here. He’s not in the same prospect category as a guy like Albert Almora, but I suspect he will produce enough to hold down a starting job for quite a few teams and would be a valuable bench addition for just about anybody.

His game is and always will be all about getting on base and using his speed. In that sense he is sort of like Tony Campana, only better in all aspects of the game except raw speed. And unfortunately, I suspect those Campana comparisons are going to be clouding the perception of Andreoli until he demonstrates that he can have major league success.

If he can keep up the walk rate and maintain the fairly even splits, I like his chances to be a quality fourth or fifth outfielder for the Cubs a year or two from now.

He could open the year in Iowa, depending on how many outfielders are signed and moved before the start of the season.  Whether in Iowa or in Tennessee, though, he should get plenty of starts all over the outfield.  He will also very likely be the leadoff hitter for his team for much of the season.

The two main numbers to watch with Andreoli are his steals (I’d like to see him be a little more aggressive), and his walk rate.  The more walks and steals, the better his odds of claiming a major league job.

And he could reach the majors this season.  It isn’t too likely, but if some holes open up at fourth or fifth outfielder later in the summer, the Cubs might prefer to bring up a guy like Andreoli who projects best as a bench player rather than bring up a potential outfield starter to sit on the bench.  It isn’t a likely outcome, granted, but I can see a couple scenarios in which Andreoli makes it to Chicago by year’s end.

For any of those to happen, though, he needs to keep producing.  If he does that, look for him in Chicago no later than late 2015.