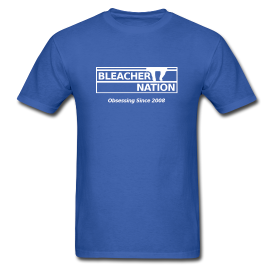 Each year the Latin American winter leagues wind down with the Caribbean Series, pitting the winners of the individual leagues against each other. That competition is going on right now, and it’s a big, big deal to fans in those countries (and quite a few folks in the States, too). Among some of the familiar faces participating: Carlos Marmol is pitching for the Dominican Republic, Daryle Ward is on Mexico’s roster, Luis Montanez is on Puerto Rico’s roster, and Robinson Chirinos is playing for Venezuela.

I offer this not only as a reminder of that tournament, but also as an opportunity to high five BN’er Checo, who is at the Serie del Caribe at Margarita Island, Venezuela, and he was representing like a boss:

You rock, Checo. Hope you enjoy some good baseball, and good weather.

You’ll have to forgive the self-promotion – I know there’s been a lot of that lately, and it’s just a matter of timing – but I wanted to let folks know that today and tomorrow only, there’s a deal going on for BN apparel: you can get free shipping on any order if you use the code “LOVELY14”. So deck yourself out (and then go to the Serie del Caribe!).