The Considerable Financial Upside of Success Skip to content 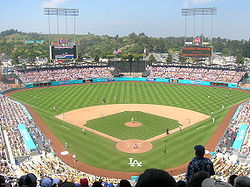 While the collective customer base can’t always sense going into a season whether its local team will be “good” or “bad,” there is a clear relationship between early season ticket sales and success in the previous season, and between late season ticket sales and in-season success. Splashy offseason additions can help at the margins, but, historically, the only real way to increase ticket sales in the long-run is by fielding a consistently competitive team at the big league level.

A recent example of this obvious relationship? How about this extreme:

Magic Johnson said the Dodgers could have sold 50 thousand season tickets for 2014 but opted against it.

The Dodgers were among the best-looking teams on paper last year, and lived into that expectation in the second half by blowing away the field from about June on. They made it to the NLCS, and the near-term future looks extremely bright, thanks in no small part to a luxurious spending binge over the past year and a half.

But being in a position to have sold 50,000 season tickets? Capacity at Dodger Stadium is 56,000, so the Dodgers could have essentially assured themselves a near sellout for every single home game in 2014 before throwing a single pitch. Imagine the implications there for price/demand. The implications for future spending, because of the guaranteed revenue. To the victor go the spoils, indeed.

It’s important to note that the Dodgers’ decision to limit season ticket holders is probably not entirely altruistic, though doing so will definitely allow a lot more people to take in Dodgers games (without resorting to the secondary market, that is) than if the vast majority of tickets were gobbled up by season ticket holders. To wit: the Dodgers could use dynamic pricing on the remaining single game tickets to maximize their take.

Allow this to serve as further evidence that a team in a large market can make a whole lot more money when it’s good than when it’s bad. And this is just one example of one revenue stream.