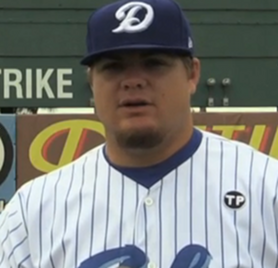 If there is one position that Cubs fans pondering the future do not worry about, it is first base. Anthony Rizzo, still just 24, is coming off a Gold Glove caliber season and is one of the best young left handed sluggers in the Majors. It is entirely possible that the Cubs already have their first baseman for the next ten years.

And that is a very good thing, because the Cubs have a surprising lack of first base prospects. First base is, however, the position of last resort for third basemen, catchers, and outfielders who have the bat to advance up the system but lack the defense to stick elsewhere, so a system lacking in talent at first is not all that concerning. The Cubs have no shortage of bats that could play first or who might wind up there one day, and those players will be discussed at the position they currently play. Today is all about the current crop of first basemen, and that will prove to be a fairly short list.

Greg Rohan missed nearly all of the 2013 season with injuries, but he should return to Iowa in 2014 with his versatile, corner-everything bench bat projection intact. Rohan is a right handed hitter who can play first, third, or either corner outfield slot in a pinch. At the plate he doesn’t strike out a lot and hits for enough power to be an asset off the bench. He could prove to be somewhat redundant if Josh Vitters claims that role in the majors this year, but for now he stays on the list as the Cubs nearest term organizational help at first.

Coming into the 2013 season, only those who closely followed Cubs prospects were familiar with Dustin Geiger. As we enter the 2014 season, though, he should be on every fan’s watch list. Geiger hit 17 home runs as part of a career best season with High A Daytona, a season that saw him finish with a line of .281/.365/.458 with a walk rate of 9.9% and a strikeout rate of just 19.1%. Against lefties he was even better, posting a merciless OPS of .956.

Geiger is a former third baseman, but it appears his future home will be at first. He should move to Tennessee this season and, although he is overshadowed by the monster bat lurking one level behind him, he is a quality major league prospect in his own right. If he continues to hit well as a member of the Smokies I would not be surprised to hear his name crop up as an extra piece in some trade talks this summer.

Dan Vogelbach might be the best pure hitter in the farm system. Not only does he feature a mountain of left handed power, he is also patient, disciplined, and is willing to hammer the ball to all fields. If you had to list the characteristics you were looking for in an ideal hitter, Vogelbach would probably have most of them.

And that’s good, because while he is a first baseman, he certainly isn’t a very good one. His best path to the majors as a Cub involves the DH coming to the National League, but if he continues to hit he will reach the majors with someone.  His bat is so potentially good, though, that he could be an absolute butcher at first and still be a very valuable commodity for a lot of teams.  Vogelbach will also be a guy other teams ask about, but the Cubs are probably not going to be in a huge hurry to move him.  Eventually the team may have to pick between Vogelbach and Rizzo, but that day is probably at least 16 months away.

No, really, that’s it. As I said in the introduction, there are plenty of other players who could wind up at first base down the road (Rock Shoulders, Jeimer Candelario, Mike Olt, Josh Vitters, to name a few), but right now all of those players are projecting at other positions. The organizational talent pool at first is surprisingly shallow in numbers.

Thanks to the presence of Rizzo in the majors, though, that really is not a concern. And even though there are only three names on this list, one of them has a very high ceiling and the other two project to be quality bench pieces at worst. From a quality perspective, the Cubs are not in bad shape at all. Even though the Cubs are lacking in quantity at first, I do not see any reason for concern.