The Cubs' Bullpen Hasn't Been As Bad As You Think, and It Could Get a Lot Better Skip to content 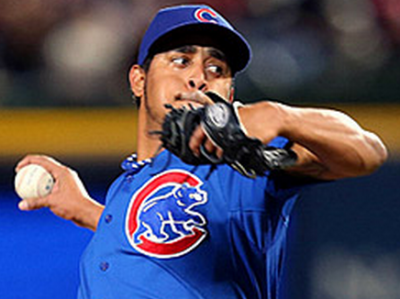 After a dreadful Cubs loss on Wednesday, I did what some apparently believe is the unthinkable and defended a unit that was being ripped apart on Twitter.

The Cubs aren't a good team right now, that's not debatable. But it's already annoying how people are crapping on a pen that's been solid.

Many people questioned my sanity after that tweet. I understand why, to an extent; but I feel anger towards the Cubs bullpen, as a whole, is misguided. The major culprits have been Jose Veras and James Russell. The other heavily used relievers (Pedro Strop, Justin Grimm, Hector Rondon and Wesley Wright) have been anywhere from great to solid, depending on how glowing you want to be with your praise.

I think we can all agree that Grimm and Rondon have been very good thus far. I’d like to see Grimm’s 12.5% walk rate* drop as the season goes, but other than that, the pair have excelled out of the pen in the season’s first four weeks. Wright has looked very good, especially lately, but hasn’t really been used as a high-leverage lefty just yet. His positive performance is probably just as relevant as Brian Schlitter’s poor performance is in regards to evaluating the bullpen as a whole.

*Let’s keep in mind that every stat that I mention in this article is an incredibly small sample. You realize that, I realize that, we all realize that. My main point is to try and show how the bullpen has performed and what we can hope to see going forward, small samples be damned.

Really, the core of the pen early on in the season has been Grimm, Rondon, Strop, Veras and Russell. Let’s examine the latter three and try to accurately evaluate their performances as well as projecting how the bullpen can go from solid (what I tweeted and what I believe they’ve been thus far) to a legitimate strength of the team.

I think we can all agree that Veras’ performance in a Cubs uniform has been, well, not good. No matter what stat you look at, they’re nothing short of unacceptable. A 15.88 ERA, a rather weak 14.3% strikeout rate and a crazy 28.6% walk rate. Add in the fact that he’s hit three batters and Veras has allowed 37.1% of the batters he’s faced reach base due solely to his wildness (via walk or HBP). Like I said, his performance has been unacceptable. There is no debating that he has not done his job and then some.

What can be debated is what should be done with him. The Cubs ended that debate when they put him on the disabled list with a left oblique strain over the weekend. This is quite possibly the best case scenario as far as trying to get Veras back on track. By placing him on the DL, the Cubs can now take their time with Veras and allow him to work out the kinks in the minors when he finally gets healthy. The other option was to use Veras sparingly at the major league level solely in low-leverage situations. This would have meant fewer opportunities for Veras to get right and more chances for fans to release their angst over a bad team upon a poorly performing player.

And let me just add this: to suggest that after 5 2/3 innings work that we know for sure he can’t get back to the guy who has proven to be a solid set up man in previous seasons, label him a sunken cost and a DFA candidate, is the type of reactionary nonsense that gives bloggers a bad name.

Frankly, I think Veras (and to a lesser extent, the 1 1/3 innings Carlos Villanueva has pitched, which both resulted in extra inning losses) has skewed the general view of the bullpen. So much so that people think Pedro Strop has also been terrible. A quick look at Strop’s rates (33.3 K% and 16.7 BB%) show he’s not that far off from what Carlos Marmol used to be when Marmol was actually good. Of course, the walk rate is higher than anyone would like, but the high strikeout rate combined with his .143 batting average against make the walks a little more palatable.

Breaking down Strop’s outings, we see he’s had three two-walk outings. The first of those he faced just three batters, striking out one and took the loss after Russell came in, walked another batter and allowed the go-ahead and eventual game-winning run to score on a sacrifice fly. The next, he worked around his walks by striking out two and ending the inning on a harmless lineout. Like Marmol often did, Strop worked his way into trouble with the walk and managed clean up his own mess with the strikeout. It’s a fine line and one little mistake can make the whole thing look like disaster. And that’s exactly what happened on Wednesday.

Wednesday’s ninth started with a four-pitch walk (I can’t stress this enough: that’s not acceptable and I’m not making excuses for Strop. Walks are a bad thing, but there are pitchers who have enough weapons to work around them often enough to be very good relievers. Strop has been and can continue to be one of those guys). Next was the error on Starlin Castro that should have at least been one out and very likely two. With Campana running, I understand Castro’s desire to want to rush that play. If you were paying attention during that series, Castro was very aware when Campana was running. He’d had at least two ground balls hit to him by Campana and in both cases there was no hesitation as he gunned the ball over to first. Those plays were very heads up by Castro, this one was just a case of him trying to do too much instead of getting the guaranteed out by stepping on second. I’m not gonna rip him for that, but this certainly isn’t on Strop.

But then, another walk. Then a strikeout (should’ve been the second out, but alas, only the first). Then that ridiculous single that bounced off second base to score two runs and then Strop just mows down one of the best bats in the league, Paul Goldschmidt, on three pitches, including a nasty slider to finish him off. That was it for Strop. What happened afterwards obviously wasn’t his fault, but eventually the tying and go-ahead runs score, and all most people can focus on are the walks Strop gave up. Imagine if Castro gets that one out? Then all we’d be talking about is how prime-Marmol-esque Strop is looking, getting in jams, then coming up huge in the clutch while looking nasty against the opposing team’s best hitter.

One mistake, one askew bounce of the ball, can change the whole discussion. Now after that outing, there are some who are saying that Strop, perhaps even the Cubs in general, can’t handle those last three outs. The whole thing just rings hollow, and is based on a complete lack of context. Outside of those two appearances where the walks bit Strop, he’s also had an appearance when he gave up two home runs (the wind was howling out and the Cubs were up by a good margin, so Strop may have been just trying to pound the zone and get some quick outs, but either way, it still counts). The bottom line is, when really looking at Strop, he’s appears to be a very solid part of the bullpen.

As for what role Strop should hold, I wouldn’t mind if he or Rondon were to close games. I like having the best reliever available to work any inning that may turn out to be the most important of the game, coming in with men on base or to face the heart of the order. While Strop most certainly can handle facing the heart of a team’s order, his tendency to hand out walks leads me to believe that he’s best used to start an inning (which is why I wouldn’t mind if he were to close) or in a situation with nobody on base.

Russell, on the other hand, is much harder to analyze. His velocity is down from the previous two Aprils about one mph, and walks are killing him right now (he’s at a 21.4% walk rate), but I have a hard time ripping him for Wednesday’s game. He faced one batter – what turned out to be the most important batter of the game – and appeared to do his job by drawing weak contact, but a seemingly catchable line drive fell in front of Justin Ruggiano in right field, allowing the tying run to score. But overall, Russell has seemed off and just inconsistent. Is it the downside of overuse? Just the random fluctuations of an average bullpen arm? Just the small sample size results of April being overanalyzed? I honestly don’t feel confident in any answer.

One thing I do know is I’d like to see Wright and Zac Rosscup start getting some chances in high-leverage situations in which Russell would normally get the call. Renteria appeared to be leaning more on Wright over the weekend (Russell hasn’t made an appearance since Wednesday’s disastrous game) and he performed quite well. Rosscup usually sits in the low nineties and has shown he can rack up the strikeouts (we’ll see what type of walk rate he puts up when used consistently at the big league level).

And that brings me to the reason I’m not concerned about the bullpen’s future. There are numerous power arms in the minors who could turn out to be very valuable at the big league level. Neil Ramirez was just called up with Rosscup, and there are many more after that pair: Alberto Cabrera, Marcos Mateo, Armando Rivero and eventually Arodys Vizcaino – who could turn out to be the most valuable of the bunch. The point is, there are plenty of options just a call away to help take a solid bullpen with a strong core of Grimm, Rondon and Strop and make the unit into a legitimate strength of the team.

To suggest this bullpen as a whole has been a disaster is just wrong. It’s too easy and frankly, a little lazy, to just say, “Haha, that’s so Cubs” and assume the relievers are a mess. There have been some hiccups and one glaring woe with Veras, but a closer look at the situation shows that things aren’t as dire as has been suggested. As I’ve said since it was clear no major additions were coming, the problem with this Cubs team is the offense, and, four weeks into the season, that’s the biggest reason this team sits at 8-16 – and will likely spend another trade deadline selling as they head toward 90-plus losses.

It’s easy to spout off stats like the bullpen’s 1-5 record and 39 walks allowed in 71 1/3 innings, but those numbers obviously don’t tell the whole story. They’re easily skewed by one bad stat line (Veras) or one poor outing. So I’ll say it again: the pen has been solid and has potential to be great. I don’t regret a thing.