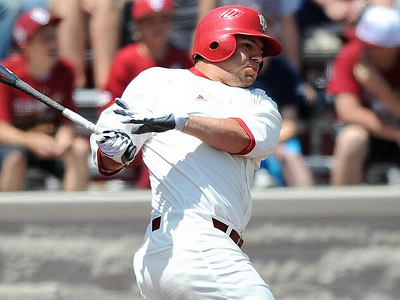 When the big three arms in the 2014 MLB Draft class went off the board in the top three picks, as they were expected to, the Chicago Cubs were confronted with a decision: pick a top prep player? A fall-back pitching option? Or do they pick a top college bat?

All things equal, the Cubs prefer a college bat at the top of the draft, and they opted for that route once again, selecting Indiana University catcher/outfielder Kyle Schwarber. The lefty batter is among the top power bats in the country – most think he’s the top college power hitter – and he combines that power with an exceptional approach at the plate. The only real knock on Schwarber is that he’s not likely to stick behind the plate, and there are questions about whether he can even stick in left field. The Cubs wouldn’t have taken him if they didn’t believe he could at least play in the outfield, though.

After the selection, the Cubs released a statement from Scouting and Player Development Chief Jason McLeod:

“Kyle has been one of the premier performers in the college ranks the last few years. He displays what we look for in patience and power at the plate. He is a high character guy we think teammates will rally around.”

That all sounds good to me.

McLeod met with the media after the pick, and among the comments:

McLeod says Schwarber was second on their list behind Aiken. That surprises me.

That is indeed a surprise – both in terms of the player rankings, and in terms of the open admission. The implication here, obviously, is that even if the White Sox hadn’t taken Carlos Rodon, the Cubs would have taken Schwarber. We’ll never know, but I’m perfectly comfortable with the Cubs standing behind their player like this. Well, as long as he sticks to a presumptive under-slot deal.

McLeod also says #Cubs could save some slot money on Schwarber, and can use that for pitching

McLeod: We expect this (sining Schwarber) to be a very quick process … There’s a good chance we’ll be able to spend some money elsewhere

That’s been the expectation.

And a little bit more:

McLeod said Schwarber was No. 2 on their list, expects him to sign shortly. Strong possibility $$$ left for subsequent signings

McLeod added #Cubs felt Schwarber was best bet in draft "hands down" and makeup "off the charts.