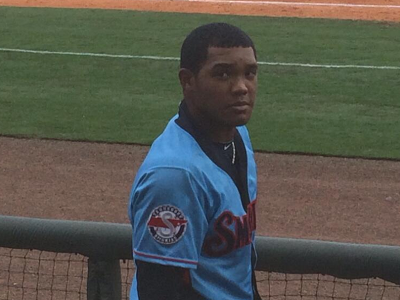 For the second time in a week, Chicago Cubs prospect Addison Russell homered twice in a game for the Tennessee Smokies. He is just 20-years-old, plays fantastic shortstop, and is awesome.

His homers last night started with this three-run shot:

He turned quickly on that one, maximizing his power ability. Power isn’t expected to be  the biggest part of his game, but he’s a big kid who can clearly crush it if it’s in the right spot.

*Edited to clarify meaning. I’m not saying he doesn’t have power. I’m saying he’s not a power-first kind of guy.

And then he hit a solo bomb the next inning:

Virtually the same thing. Up and on the inner half, and Russell turns on it.

In his 13 games at AA with Oakland before the trade, Russell hit .333/.439/.500 with 8 walks and 8 strikeouts, so, on the year, his AA numbers are quite good – especially for a 20-year-old shortstop. About what you’d expect from a guy who is considered a top five prospect in all of baseball.