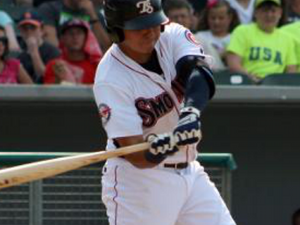 A minor update to the MLB.com top prospect list for the Chicago Cubs, which has changed a bit these last couple months, with guys like Arismendy Alcantara and Kyle Hendricks graduating, and guys like Addison Russell, Billy McKinney, and Victor Caratini added to the fold. We’ve discussed some of the changes piecemeal in the past, but, with a fresh update (Hendricks graduation) today, I thought it worth a re-look.

The top 20 Chicago Cubs prospects, according to MLB.com:

At last, Christian Villanueva re-emerges on a Cubs list after a rough 2014 season. Prior to this year (and the continued influx of talent ahead of him), Villanueva was right there in the 8 to 12 range for the Cubs, given his elite glove at third and his power potential. Since a midseason demotion back to AA, the good news is that Villanueva’s lofty K rate has come way down to an excellent 15.8%. The bad news is that his numbers, on the whole, have not rebounded. That’s partly thanks to a BABIP that is down in the .260s at both AA and AAA (he was previously a .300 to .320 guy), but also partly because the power he flashed last year simply hasn’t been there this season. There’s still time for Villanueva to right the ship – he’s just 23 – but the 40-man spot he currently occupies could give the Cubs some tough choices this offseason.

Other things you may notice on the list include Billy McKinney now reaching the top 8 – he just turned 20 and has been killing it in the offense-challenging Florida State League – and Victor Caratini slotting in at 12. He was the catching prospect the Cubs picked up from the Braves at the deadline in the Emilio Bonifacio/James Russell deal.

It’s worth checking out the list for individual scouting reports on the included players.