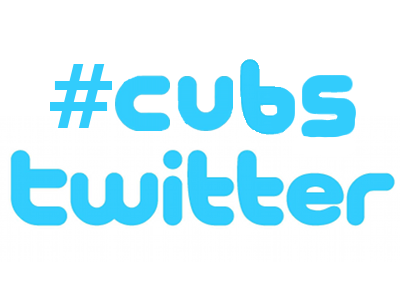 Over the past two days, I started collecting particularly fun tweets from the #CubsTwitter world that I wanted to share, presumably in the Bullets. But then the number grew so large that it made sense to share them in their own post. So this is that. Also: follow BN on Twitter.

Dare I start with the most bizarrely awesome one of the entire set? Yes, I dare. I am mesmerized:

I like to imagine that that isn’t GIF-i-fied, and it’s just John Baker quickly making those faces in succession for no reason at all. In any case, I dare you to try and watch that fewer than five times.

this is pretty awesome, via the @baseball_ref Play Index

I totally approve of that sample size. Completely reasonable.

Kris Bryant and Jen-Ho Tseng were at Wrigley Field yesterday to receive their Player and Pitcher of the Year Awards, and I just thought this was a good shot:

Jason McLeod is very tall. The funny thing is that Tom Ricketts and Theo Epstein are not short guys.

Speaking of not short guys, look at this:

I mean, Anthony Rizzo is huge. And I know the angle of his lean distorts the picture a bit, but damn. It’s always crazy to see that perspective on the size of NBA players. Not human.

Speaking of NBA players, they are not baseball players:

Is “shot put” one word or two?

I got lunch with friends yesterday at a hot dog place in Columbus not unlike Hot Doug’s in Chicago, and it wound up being more like Hot Doug’s than I expected:

Unbeknownst to me, lunch with friends at Dirty Frank's – in Columbus – brought me to a Chicago spot. pic.twitter.com/DrZXQQ2vbN

The place was loaded with Cubs stuff for some reason. And, yes, that is fan art of Rod Beck. Long live The Shooter.

Finally, a fun representation of the Cubs’ new High-A affiliation with the Myrtle Beach Pelicans:

That requires a “look closely” to fully appreciate.