Fun With Chris Coghlan's Big Day, and Future with the Cubs Skip to content 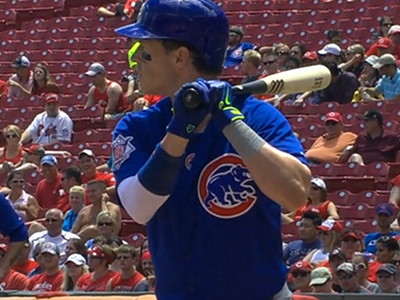 On Saturday, Chris Coghlan went 4-4 with two homers and a double, and he also gave the Cubs the comeback win with the second of his homers. He had great at bats all day, hit the ball well (he actually hit the ball very well that whole series against the Dodgers, even if the BABIP gods took a few away from him), and looked like the guy he hinted at being five years ago before injuries and sporadic playing time threatened to derail his career.

Some fun with the big day:

There is no doubt that Coghlan, 29, has had a fantastic season, and, for the most part, it’s been legit production, not just a bunch of luck. The question heading into the offseason, then, is what plans the Cubs will make for Coghlan’s 2015 role. As an arbitration-eligible player (he made a pro-rated $850,000 with the Cubs this year, and figures to approach $2 to $2.5 million in 2015), the Cubs will obviously be retaining Coghlan’s rights, and probably won’t seriously consider trading him. That means Coghlan is a virtual lock to be on the roster for Opening Day, though his role will probably depend on what the Cubs do in the offseason (add a leadoff type in the outfield somewhere?) – and how they envision the future for guys like Arismendy Alcantara and Kris Bryant (as well as their other infielders, because of where those guys might end up).

The Cubs also have reserve outfielders Justin Ruggiano and Ryan Sweeney under control for next year (as well as Junior Lake and Ryan Kalish, if the Cubs opt to keep them on the 40-man roster). Although Coghlan has demonstrated more value with the bat this year, each of Ruggiano and Sweeney can play some center field, something that no longer appears to be a realistic option for Coghlan, even in short-term duty.

That is all to say … I really don’t know what the Cubs will do with Coghlan next year, but I do know that it’s good to have a guy like that around, and the front office deserves credit for parlaying yet another minor league signing into a useful medium-term piece. Ideally, he’s probably a great fourth outfielder on a loaded team. But I can certainly envision a scenario where he heads into 2015 as the nominal starting left fielder, perhaps holding down the fort in advance of Kris Bryant’s arrival (depending on where he’s going to play long-term).

Apropos of all of that, here’s a good read from Bruce Miles on Coghlan, including his input on being a “veteran” – even if he doesn’t feel like that – on a team of youngsters.

A video recap of his big day:

And thoughts from Coghlan, complete with shaving cream pie via Anthony Rizzo. Coghlan is such a pro – he wipes his face, and continues the interview like he doesn’t look like a deranged clown: