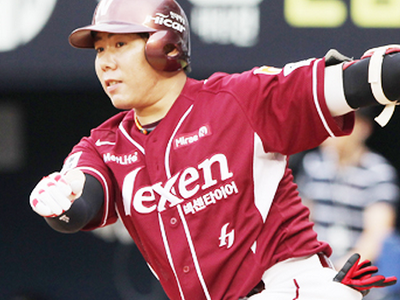 One of the international names floating out there that I’ve not yet mentioned around here is Korean shortstop Jung-Ho Kang, whom Nick Cafardo has reported is likely to be posted by his KBO team this offseason. I’d resisted mentioning the 27-year-old infielder for a variety of reasons: there was no specific connection of possible Chicago Cubs interest (and infield talent isn’t exactly their top need right now), there are significant questions about whether he’ll be more than a bench player in the big leagues, and there hasn’t been much discussion of his market yet.

Well, that calculus changes a bit this morning, with word from The Korea Times that the Cubs, together with the Tigers, Rangers, Padres, Royals, Red Sox, Nationals and Diamondbacks, have scouted Kang in Korea. Keep in mind, of course, that the Cubs perform diligence on basically every available player in the world, so the fact that they’ve scouted Kang doesn’t necessarily mean they’re all about him. And, frankly, there are probably even more teams than the ones listed who’ve scouted him. Indeed, according to this report, given that teams knew there was a chance he could come to the States in 2015, a number of MLB teams have been scouting him since last Spring.

Who is Kang? Well, he’s one of the top bats in the KBO, and is coming off a year in which he hit .360/.463/.756 … and you’re immediately like, “Holy crap, sign that guy today!” Well, that line marks a significant spike from his previous career numbers (career .885 OPS, even including the enormous 2014), and the KBO in general has seen a huge increase in offense this year, thanks in part to a new ball. It might be wise to almost throw last season’s line out the window.

Then again, even doing that doesn’t provide much context because there has never been a player coming straight to MLB after a career in KBO. Yes, there have been Korean players in the bigs, but all signed as amateur free agents. This is new territory, not unlike when the flood of Cuban players started, and there was uncertainty as to how their skills would translate in the bigs.

That makes for a nice untapped opportunity, but only if Kang can actually hit in the Major Leagues … which is debatable. My #NotAScout take on watching some videos of Kang leaves me very circumspect that his huge, long, long leg kick approach can work against fastballs that consistently sit in the mid-90s. And if that approach can’t work, can he be expected to completely adjust his approach at the big league level?

Defensively, Kang is a shortstop, but it sounds like many think he’s a third or second baseman, or maybe even an outfielder, in MLB. That could make him an intriguing utility option for a team like Cubs, but if he’s viewed by other teams as a clear starter, then maybe there will be stronger financial interest elsewhere.

Speaking of which, Kang will be subject to the blind-bid-top-bidder-gets-rights posting system, which you may remember from before last season. That’s because the new agreement – remember the Masahiro Tanaka drama? capped bids of $20 million? negotiating with multiple teams? – was between MLB and NPB, only. MLB and KBO have a separate agreement, and it’s the old system. Whoever bids the most for Kang’s rights, in a blind bid, will get to negotiate a contract with him. It’s hard to know how large that posting fee could get, but since Kang will have a market of only one team with which to negotiate (and a very small salary in Korea), it’s fair to guess that his actual contract will be quite modest.

We’ll see what happens as the time for posting approaches, and whether we hear more about the Cubs specifically. I’m skeptical. Kind of feels like, if he’s really good, the teams with dire infield needs will bid far more aggressively than the Cubs should; and if he’s not impact-caliber, it’s hard to get too excited about a guy with utility upside. Not that a guy like that doesn’t have value, though.

If Kang does prove to be a starting-caliber player – or at least if he’s viewed that way this offseason – he will contribute to a free agent class that has shifted markedly in the last couple months thanks to international entrants. What once looked like an extremely weak offensive class now looks much better with the additions of Cuban outfielder Yasmany Tomas and Cuban infielder (probably) Jose Fernandez.