Wake Up: There's a Big Day on Tap with Maddon, Qualifying Offers, Options, and Free Agents Skip to content 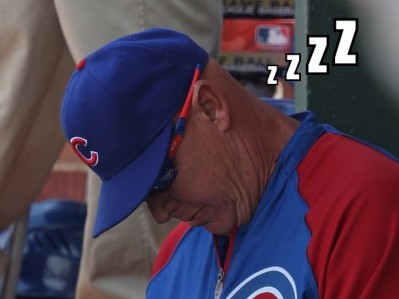 Now that you’ve been properly apprised of everything you may have missed from a busy weekend, here’s a look at what’s coming in a very busy day. There is a ton of news and rumors to discuss throughout the day (seriously, my fingers are getting a workout), but there are also several specific, important things happening today:

The new manager of the Chicago Cubs will be introduced to the media at a 2pm CT press conference, which should be illuminating and entertaining. I’m not yet invited to cover these things, but thankfully you and I can still watch it, courtesy of a live feed that will be up at MLB.com, CSNChicago.com, and ESPNChicago.com, among other places, I’m sure. I will do just that, plucking the most interesting bits, along with reaction and feedback on the fly, in a live blog.

Teams have until 4pm CT to decide whether to make a one-year, $15.3 million offer to their departing free agents. The players receiving an offer will have 7 days to decide whether to accept or reject the offer. If he rejects it, the player is subject to draft pick compensation – that is to say, the team that loses him gets a draft pick at the end of the first round in 2015, and the team that signs him loses a draft pick in 2015 (for the Cubs, they would lose their 2nd rounder for signing a qualified free agent (and their 3rd rounder if they sign a second qualified free agent (and their 4th rounder … you can see how this goes – it actually creates an opportunity for extra relative value))).

Today is the final day for teams and players to make their options decisions. Most have already been made (or at least reported), but, for example, the Cubs still have to make a decision on their $5 million option on lefty Tsuyoshi Wada for 2015. Being that they are taking this kind of the wire, I’m surmising that they see this as a closer decision than the Kyuji Fujikawa and Jacob Turner decisions (which isn’t saying much, because those were pretty obvious), or maybe they are going to see if there’s a trade partner for Wada at that price. If it’s that, we could have some trade rumors late into the evening – the deadline on the option decision is 11pm CT.

I don’t want to get you too tingly for excitement, though: even if there is a trade angle here, the return probably won’t be too much, and it’s just as likely that the reason the Cubs are taking this to the wire is merely because they’re trying to negotiate a lesser deal with Wada before having to turn him loose to free agency.

Although free agency technically started as soon as the World Series ended, players weren’t permitted to sign with new teams until five days later. That’s tonight. I wouldn’t expect anyone to actually sign immediately, but there is sometimes a wave of signings very soon after free agency opens up. More likely, though, we’ll just see an uptick in rumors as players and teams really start getting into discussions.