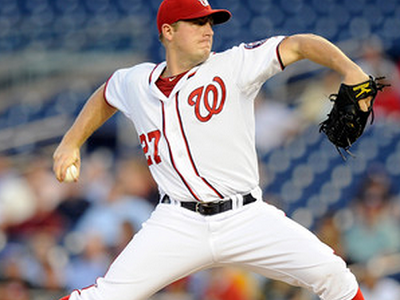 Last week was a little crazy for a number of reasons, but none was bigger than the Jordan Zimmermann rumor. The Cubs were in talks to acquire the Nationals righty, according to a Gordon Wittenmyer report, in which one source indicated he expected a deal to get done. To say that the report was at once exciting and confusing is probably an understatement. With just one year left before free agency – at $16.5 million, no less – the fit was odd. Would the Cubs want Zimmermann long-term? Yeah, I could totally see that. But would they trade significant prospects for Zimmermann in 2015 – a year the Cubs have repeatedly said that they’re not going to sell-out in which to compete – and then hope to sign him to a significant extension? I suppose that’s possible, too, but it felt like a long-shot, not any kind of sure thing.

The Cubs quickly and aggressively denied the rumor, and the Nationals were not far behind. No such talks had taken place, sources said, and the Nationals were happy to have Zimmermann. To me, it sounded like an intentional leak on the Nationals side to subtly inform the market that they’d like to get some aggressive offers on Zimmermann without having to lose the leverage associated with not actually affirmatively shopping him to teams (and not to fracture any goodwill with Zimmermann).

Well, it may not have worked:

The #Nats are informing teams that ace Jordan Zimmermann is available,but only if they get strong return,emphasizing it is not a salary dump

With several key players coming up on free agency – Zimmermann, Ian Desmond, Tyler Clippard, and Doug Fister, to name a handful – and with no visible movement on an extension, the idea of shopping Zimmermann makes sense for the Nationals, even as they look to compete in 2015. They’ve got a hole at second base that they could try and fill via such a trade, while securing a little control in the process. In that regard, from the Nationals’ perspective, a trade with the Cubs for a young middle infielder makes a ton of sense. Perhaps that player can man second base in 2015, and then slide over to shortstop in 2016 if Desmond walks.

But, circling back to the opening paragraph, trading an elite prospect for Zimmermann’s one year of (expensive) control doesn’t make a ton of sense for the Cubs. To put a name on it: no, I didn’t think then, and I don’t think now, that a year of Zimmermann at $16.5 million is worth Javier Baez.

If the Nationals decide they can’t get an elite prospect given the price tag? And if the Cubs somehow internally like their chances at being able to extend Zimmermann on a reasonable deal? Then, sure, I’m intrigued. After all, Zimmermann remains my favorite post-2015 target for the Cubs in free agency, even ahead of David Price (although another solid year from Rick Porcello could turn my head). There are formulations of a deal, perhaps involving multiple players on each side, that could make sense for these teams. Putting that kind of deal together, however, is very complicated.

I do find it interesting that the Nationals are explicitly emphasizing that shopping Zimmermann is not about dumping salary. Usually if you have to say that out loud, you’re giving negotiating partners ammo to reduce their offer. In fact, to me? It sounds like the Nationals believe they cannot extend Zimmermann, and so they want to trade him to fill a hole and save some money, while using that money to sign another starting pitcher (one whom they would control beyond 2015).

Although I won’t say the Cubs will be involved, I do think Zimmermann being on the move this offseason has legs. And, given the Cubs’ involvement in the pitching market (Zimmermann’s availability would affect the free agent market, as well as the trade market), and in elite free agent pitchers like Zimmermann next offseason (what if he’s traded to a team hell-bent on extending him?), this is a fairly important story to follow.

For most of the reasons above, by the way, this is also worth noting:

Veteran #Nats pitcher Doug Fister, who like Zimmermann also is eligible for free agency in 1 year, also is available if a deal makes sense

I don’t want to dig in too deeply on Fister, because I don’t find him nearly as attractive as Zimmermann, but, suffice it to say, his availability has a similar, though reduced, market effect.