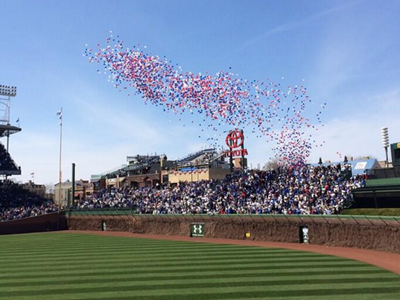 I hope you’ve got some fun plans for the evening as you close down 2014 and head into 2015. The Taylor Household will be host to other families with small kids, which is appropriate and emblematic of much of the year for us. It’s amazing how quickly you start marking the time by the things occurring in the lives of your children.

I’m lucky, though, to have another convenient way to mark my time: the year in the Cubs and at BN.

It’s probably at least partially my brain creating convenient narratives, but, is it just me, or did the Cubs’ year start at a low and then just keep rising throughout 2014?

In January, we had the Masahiro Tanaka disappointment and rooftop fight coming to a head (on the same day, no less). All things Wrigley Renovation were frustrating for the first half of the year. The best stories in Spring Training – Mike Olt and Ryan Kalish – wound up struggling and eventually sent to the minors. The Cubs didn’t look like a competitive team heading into the year, and no one was expecting anything but a mid-season sell-off.

The 100th Anniversary Game at Wrigley was a lot of fun until an almost unbelievable 9th inning implosion. And every day it seemed like the Cubs were getting picked apart for some stupid off-the-field thing.

The Cubs struggled so mightily in the early going (highlighted by Jose Veras’s disastrous stint with the Cubs – did you forget about that?). Those pre-seasons fears of a non-competitive team? Confirmed.

By which I mean the fireworks I was watching from my driveway at 10pm on the Fourth of July while I frantically tracked and typed up the then-breaking Jeff Samardzija and Jason Hammel trade. The Cubs netted a heck of a nice return there, and never really looked back.

Not only did the draft go well, but top pick Kyle Schwarber exploded onto the scene in the second half, justifying the Cubs’ selection and then some. Other prospects had great second halves, in particular. Too many to go over. Kris Bryant won every award ever. It was just a great year for Cubs prospects. (#Sparkle #BaezAfterDark #Dangerous)

The Cubs decided to move ahead with the renovation, and eventually got the approvals necessary to start work.

Young talent started popping up on the big league team, and watching their emergence was a hell of a lot of fun (COOKIES!). And the still young players that preceded them – Anthony Rizzo, Starlin Castro – were having great years.

Jake Arrieta was a treat to watch every time he took the mound (except that one start against the Rockies, but whatever – Coors Field, man).

How much fun was watching the Cubs in August and September? When was the last time you could ask that with a straight face?

And then the Cubs got Joe Maddon.

And then the Cubs got Jason Hammel back. And Miguel Montero. The hype was building.

And then the Cubs got Jon Lester.

As we sit here today, the final day of 2014, the Cubs look like an honest-to-God contender in 2015. No, they’re not a lock to push for a playoff spot next year, and the best days are still probably a couple years in the future. But today sure looks a lot better for the Cubs than December 31, 2013 did.

The promise of 2015 is hope that skews just a little more realistic than it has in recent years. I’m ready to turn the calendar and start living in it.

It was a quite a year at BN, too. When I think back on the year, it is, for me, compartmentalized into four chunks: the big financial piece (which took every free minute I had for most of January, February, and March, but it was totally worth it), redesigning the site (hello April and May, farewell message board and BN Podcast), the heat of the season (the draft, trade season (the highlight of which was you all donating more than $16,000 to Make-A-Wish), and a surprisingly exciting tail end of the season), and then the insanity that started with Joe Maddon opting out of his contract in mid-October and didn’t cease until about three days ago.

It was a good year. A long year.

After taking a moment to breathe, I’ll let myself look ahead to 2015, and wonder openly how it is that I will write about a Chicago Cubs team that is expected to be competitive. I’ve become accustomed to the rhythms of the past few years, and I’m not really sure what a year at BN looks like, in terms of coverage, when the Cubs aren’t rebuilding. But, hey. Change is good. And this change is exceptionally good.

Thanks again to all of you for a great year at BN (if you missed my more specific, heartfelt thanks on Christmas, see it here).