Joe Maddon Likes Reverse Split Relievers ... So Do the Cubs Have Any? Skip to content 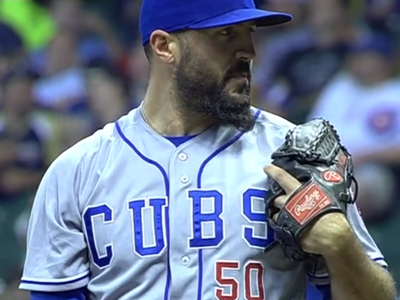 Maddon told reporters this weekend when talking about the bullpen: “I’m really into the reverse split guys. Those guys can be really dangerous.” (ESPN)

Reverse split guys, as Maddon calls them, are pitchers who are more effective against opposite-handed hitters than same-handed hitters. Such pitchers are atypical, and can present matchup problems for other teams because they create a situation where an opposing manager may have to try and counter a reliever by using a same-handed batter, even if that batter is not as comfortable against same-handed pitchers.

To be sure, the ideal pitcher is equally excellent against both lefties and righties, as Maddon acknowledged. But, since he opened the door to the reverse split conversation, I’d like to have it.

Maddon is into reverse split relievers … but do the Cubs have any?

We’ll keep this neat and tidy by going with just one metric (not advised if you’re looking for thoroughness, but should serve our rough purposes here), and stick to the gents who have the best chance to actually make the bullpen.

Here’s the rundown of potential 2015 Cubs relievers, with their big league career FIP against same-handed batters, and then opposite handed batters (pitchers with a reverse split are in bold):

So, about the bolded guys …

Then there’s Ramirez, who was awesome last year, but he was also a rookie. So the sample size is tiny (he faced just 71 lefties total). He doesn’t have that same reverse split in his minor league career, either.

Ditto for Britton on both of those counts.

Turner is very close, and the sample size is not that small. The issue with Turner thus far in his career, however, is that he’s been equally ineffective against both lefties and righties.

Jackson has a slight reverse split, but I’m not sure how much of a shot he’s going to get to be an integral piece in the bullpen.

In other words, I’m not sure there’s much meaning to be taken away from the splits on any of those five guys.

And then there’s Blake Parker. Parker’s big league sample size is relatively small, but the reverse split has been his story throughout his professional career, minors and majors. Further, the “story” generally stays the same between the minors and the bigs: he strikes out more lefties, and he doesn’t really give up homers to lefties. The only difference you see is that he has walked a lot more lefties in the big leagues than he did in the minors, but it’s generally been offset by an absurd big league strikeout rate against lefties (33.6%).

When we talk about the bullpen competition, Parker’s name doesn’t come up a ton (mostly because the rotation is overcrowded, and the bullpen figures to have five right-handed locks as it is (Rondon, Strop, Grimm, Ramirez, Motte)). But, coming into 2014, remember how he was considered one of the near-locks after a great 2013 season?

Obviously last season was very up-and-down, but he’s still an interesting arm. Heck, even his up-and-down 2014 season featured a 3.28/3.12 FIP/xFIP in 21 big league innings, and his trademark dominance when he was at AAA. Parker is 29, and does have one minor league option left (though due to his service time, the Cubs would have to pass him through optional assignment waivers before he could be sent down at the end of Spring Training).

So, at the end of this exercise, I suppose I’d say that, to the extent Maddon really likes reverse split guys, and to the extent the Cubs would think of Parker as a guy who’s particularly effective against lefties (even though he isn’t, himself, a lefty), maybe he gets a tiny bump in terms of likelihood to make the team.