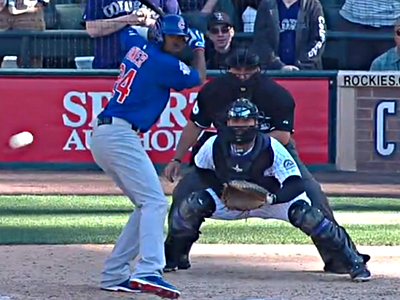 I hope, for your sake, you were watching live yesterday when Dexter Fowler capped off a dramatic Chicago Cubs comeback in Colorado. In recent years, Cubs fans have been conditioned by the #TeaserRally to presume that, if they’re trailing in the 9th, the game is over, even if they put some runners on base, and score a run to close the gap to just a single run.

Someone who can more savvily access the data than I can probably state definitively in the comments, but my vague memory is that, in the last three years, the Cubs have come back to win after trailing in the 9th inning just once or twice.

That made Fowler’s bomb all the more incredibly exciting:

I want to listen to Len Kasper drop the “ohhh, baby!” on a loop. And, then, if you stay tuned, you get Pat Hughes’ call of the homer, too. It’s awesome – just like Kasper, Hughes completes the call, pauses, and then, instead of “oh baby,” he simply says “wow.”

Also, it was a nice bonus to see that it was a Cubs fan who got the home run ball.