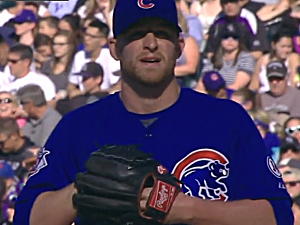 The Chicago Cubs have quality bullpen depth, and, if they were going to get bit by the injury bug, that’s probably the place they were best suited to deal. (There, or the back of the rotation, where, you know, they also got bit.)

That doesn’t mean anyone has to be anything but bummed about Neil Ramirez’s early exit last night, caused by “shoulder discomfort.” The 25-year-old dominant righty will get an MRI today (Cubs.com, ESPN, CSN), which means there is at least sufficient reason to check things out. Given that Ramirez dealt with a shoulder issue before being traded to the Cubs in 2013, that’s not good. Also, the fact that his fastball was hitting only 90mph and Miguel Montero said something seemed off … also not good.

Until the results of the MRI are in, I don’t want to go into panic mode, even as I confess that shoulder issues for pitchers, in particular, can be real trouble. For now, we’ll hope it’s muscular or some other minor issue. Even in that case, though, it’s highly likely that Ramirez will spend some time on the disabled list.

How will the Cubs handle that, in terms of the roster?

Well, because lefty Zac Rosscup came up to replace Tommy La Stella on the roster, the Cubs were at 13 pitchers. That was necessary for the final two Reds games this week, because the bullpen had been heavily-taxed. But, with an off-day today, and Jake Arrieta and Travis Wood going relatively deep into their starts the last two nights, it’s possible the Cubs were going to go back down to 12 pitchers anyway for tomorrow’s game.* That would mean it’s possible the Cubs will send Ramirez to the disabled list, and replace his spot on the roster with a positional player. As we discussed yesterday, it remains possible that the player will be Kris Bryant.

Given the Cubs’ bench situation – two catchers, an injured Mike Olt, and an outfielder – it is very hard to see them not bringing up a positional player, likely one who can play infield, for the Padres series this weekend. That’s especially true if Olt’s injured wrist continues to prevent him from starting (he didn’t appear in last night’s game at all).

If they want an infielder, the Cubs could surprise and bring up Christian Villanueva, since he’s already on the 40-man, but that’s unlikely. The Cubs could add Chris Valaika for the weekend, but then would risk losing him if they wanted to send him back down to Iowa. They could bring up an outfielder like Junior Lake, if mostly for his bat, rather than his position – but he’s not been hitting too well in the early going. The Cubs could add long-time organizational member Jonathan Mota, as there’s less risk he’d be claimed on waivers if/when the Cubs then took him off the 40-man.

As you can see, I’m straining a bit to come up with possibilities other than just bringing up Kris Bryant, and getting that show on the road. Whatever the precise day, Bryant’s coming within the next week.

My guess is that, unless Olt has to go on the disabled list, the Cubs make due for the weekend with an extra reliever or one of the short-term infield call-ups, and then have Bryant ready to go when the road trip starts in Pittsburgh on Monday. That said, a weekend call-up for a Wrigley Field debut is still possible, depending on the health and composition of the roster – I’m sure that’s being discussed heavily today.

Keep your eyes on the Iowa Cubs, who start a doubleheader tonight at 5pm CT. If Bryant plays in both games, there’s just about no way he’s coming up tomorrow. If Bryant plays in just the first game, a Friday call-up is theoretically possible. If Bryant plays in neither game, well, then, unless he hurt himself walking around today, you know what’s coming. Iowa’s home opener is tomorrow night, and the same thinking would apply. It would really stink for the I-Cubs if they didn’t get to open their home slate with Bryant on the team, but, obviously, that’s not the primary consideration.

*(Tsuyoshi Wada is going to be heading out on a minor league rehab assignment soon, so, at some point in the near future he’ll be ready to return to the Cubs. Unless a rotation spot opens up in the interim, the presumption would be that he’d go to the pen. That might not happen in time for the upcoming stretch of games, but it’s something to keep in mind when we discuss the roster/bullpen/pitching/injuries/etc.)