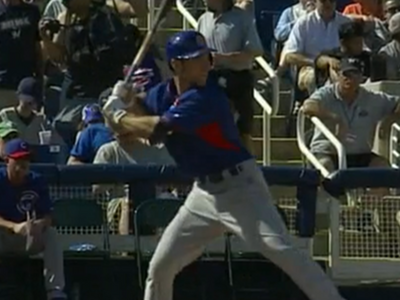 Down two runs in the bottom of the 9th with two men on, and this is pretty much the dream scenario:

That’s just about my favorite thing in the world. I also really enjoy the celebration at the plate, as well as how abruptly it ends (“AAAAHHHH YEAHHHH GO SZCZ … ok, we’re done.”)

Although he’s not been able to stick at the big league level, Szczur’s been hitting extremely well at AAA Iowa this year: .303/.360/.485 coming into this game, and his pop is improved dramatically (just as it was in Spring Training after he changed his swing pretty significantly). His ISO at AA and AAA prior to this year was below .080, but it’s up to a robust .182 this year. Pop was always the question with Szczur – no, you don’t need him to be a home run hitter, but to be able to most effectively use his speed, he’s got to be able to hit the ball with some authority and force defenses to respect his power.

Szczur will probably see some time with the big league club again at some point this year, though his long-term role remains up in the air.