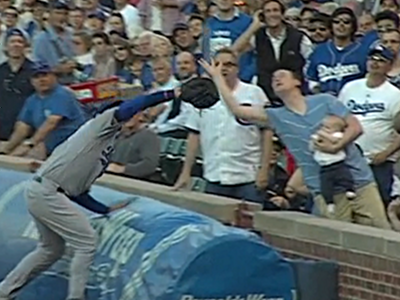 Jason Hammel fouled a ball off down the first base line in the second inning tonight, and Adrian Gonzalez appeared to be in position to catch it.

But he didn’t catch it. This guy did:

As you could see, after a replay, Hammel was called out on fan interference. Gonzalez looked like he would have caught it anyway, so I wasn’t too bummed.

The main point of discussion folks have been having is whether it was OK for the dad – while holding and feeding his baby – to try and catch the ball at all. What if Gonzalez had deflected it into the baby’s face? What if the dad had flat out missed? What if he’d dropped the baby?

All is well that ends well (or safely, at least), I guess, and I can’t say I wouldn’t have instinctively done the same thing. But, man, that seems pretty dangerous. Heck, even having such a young baby so close to the field seems dicey.

It was a fine catch, though.

Report: Blackhawks Would “Listen To Trade Proposals” on Marc-André Fleury