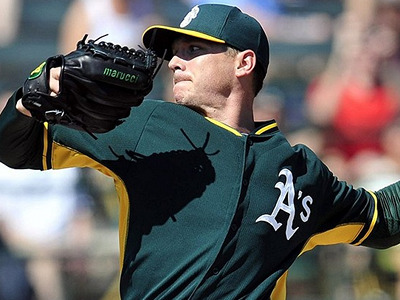 When you read a report that Oakland A’s lefty Scott Kazmir “has been a prime target” for the Chicago Cubs, and that they’re on the hunt for starting pitching, you could read that in two ways: (1) nothing new there, or (2) more smoke for things we’ve heard.

Whatever your predilection – which probably bears some relationship to the way you would describe a partly-filled glass of water – that’s the report from Bruce Levine, which you can read here for more information.

The Cubs’ interest in finding another starting pitcher is no secret, openly discussed by the front office (and observable to anyone, frankly). As for Kazmir, specifically, the lefty has been mentioned in connection with the Cubs, and has long made sense as a rental starter for the Cubs, especially after he established he was healthy and productive. Kazmir won’t come for free, but the financial investment is small and short-term (he’s a free agent after 2015, making $13 million this year), and the Cubs would be betting on his health for only a couple months, rather than many years.

Kazmir, 31, has been consistently very good since his return to the big leagues in 2013. Adding someone like him would not only improve the back of the Cubs’ rotation, but it would also improve their quality depth by bumping someone from the rotation into that role.

The Cubs have a range of interesting Rule 5-eligible players, and they won’t be able to protect them all on the 40-man roster after this season. (As just one example, it makes you think of a guy like Dan Vogelbach, who’s got a big league bat, but whose future with the Cubs is unclear – doesn’t he seem like an Oakland A’s kind of player? There are many others, though, who could be a fit in these kinds of rental trades. And, to be quite sure, Kazmir would likely cost more.)

We’ll see if the Cubs really do look to act quickly. I still tend to think a deal before the All-Star Game – before more sellers decide they’re sellers – is unlikely. And, of course, the Cubs aren’t going to be the only buyers out there.

In any case, Kazmir remains someone particular to watch.