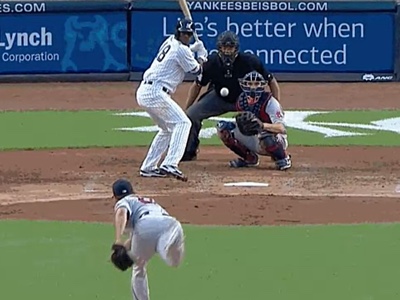 Steven Wright is a 30-year-old Boston Red Sox pitcher who put up some decent numbers last year, but has never really broken out in the big leagues. Until today, that’s all I knew about the man.

Which is to say, until I happened upon this GIF:

I am not exaggerating when I say I’ve watched that 20+ times on a loop, studying the seams and the movement and trying to figure out the how and why of where that ball went.

Wright hasn’t really had a ton of success this year, but, after RA Dickey broke out late in his career after becoming a knuckleballer, I can’t help but be intrigued every time I hear about someone like Wright, who didn’t become a knuckler until 2011. Before then, Wright was a long-time Indians farmhand who couldn’t break through.

In any case, enjoy the GIF, and dream about the possibilities of some random, seemingly washed-up pitcher becoming a star for the Cubs with the help a ball that will not rotate. It would certainly be fun to watch every five days.