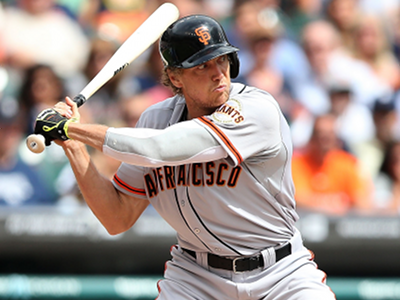 This may be the biggest other-team-injury news to impact the Chicago Cubs in a while.

So, news today that Giants outfielder Hunter Pence is headed to the disabled list with an oblique strain is very significant. Pence, who missed last night’s game, injured his side on his final swing on Monday. The Giants are hopeful that Pence can return in only a couple weeks, which seems extremely optimistic when it comes to oblique injuries. As we’ve seen with Tommy La Stella and Dan Vogelbach this year – and many other hitters in years before them – obliques are a tricky thing, and, while the timeline for recovery can vary wildly, they rarely are a short-term thing.

With Angel Pagan and Nori Aoki already out (though the latter should be back soon), the Giants must be scrambling a bit in the outfield. Pence is hitting .275/.327/.478 (130 wRC+), and, although the Giants’ lineup has been solid, that’s a big bat to lose at this point in the season for any stretch of time.

Even if Pence misses only two weeks, there’s one series he will miss for sure: next week, when the Cubs go to San Francisco.

It’s conceivable that the Giants will now aggressively pursue a bat for the outfield, to the extent they’re able to get a decent piece here in late August. It’s not easy.

This isn’t the first time this year that the Cubs, Pence, and an injury have crossed paths, by the way. You may have forgotten, but an errant pitch from Cubs pitching prospect Corey Black in Spring Training delayed the start of Pence’s season. He’s appeared in just 52 games so far this year.