Ian Happ is Blazing Hot, Also Made a Awesome Catch and Double Play Skip to content 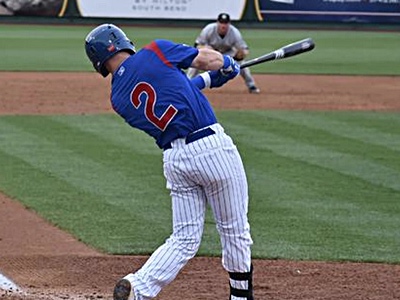 Baseball America just included recent Cubs first round draft pick Ian Happ in their Prospect Hot Sheet for games ranging from August 14-20. Over that stretch, the 21 year old slashed .455/.519/1.000 (10-22) at Low A South Bend, with 9 runs, 2 doubles, 2 triples, 2 home runs, 8 RBIs, 4 walks and 4 strikeouts. Coming in at number 12 (of 20), Happ is the only Cub on a list that features 7 other members of teams affiliated with the NL Central – with players from every team besides the Pirates.

Offense hasn’t been the only reason to get excited about Happ, though, as he’s shown strong defensive skills from all three outfield positions. Check out this fantastic double play he started as the South Bend Cubs left fielder:

Ian Happ makes a terrific leaping catch at the wall and fires back 7-4-3 for the DP. pic.twitter.com/BmxEos8xO2

Not only was the catch itself spectacular – he tracked the ball all the way back and made the leaping catch against the wall, despite turning himself around – Happ had the presence of mind and arm strength to pick off the runner who left from first base all the way from left field!

While Happ may never be the hitter that Kris Bryant or Kyle Schwarber have been, he does seem to have a solid approach at the plate and plenty of power for a corner outfield spot. Given his evidently solid defense, though, center field is not out of the question, and neither is second base, where his bat plays very well. After this season concludes, look for Happ to get some time in the instructional league (where the Cubs have said he could see time at second base), before starting out at Myrtle Beach as soon as the beginning of next season. Assuming he’s not promoted there for the Pelicans’ upcoming playoff run, of course.