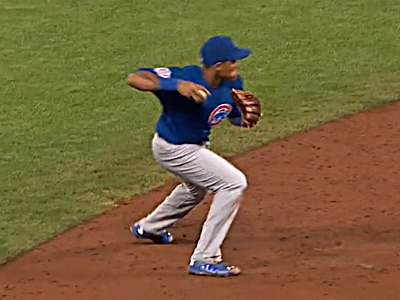 Although he came up through the minor leagues as a shortstop, with most observers believing he could probably stick there in the bigs, Addison Russell actually arrived in Major League Baseball as a second baseman. It wasn’t for lack of faith in his abilities at shortstop, mind you – it’s just that the need was at second, and Starlin Castro was entrenched at shortstop.

While at second base – a position he was still learning – Russell was no stranger to incredible plays. And, as that last link indicates, Russell emerged as one of the best defensive second basemen in baseball by the time he was shifted back to shortstop.

There, he’s taken well to his natural position, and showed it again last night with a fantastically smooth snag and turn for a double play against the Giants:

Smooth. So smooth. Nice turn at second base by Castro, too.

I love watching the looping version, as well:

Long term, it’s not certain that Russell will remain the Cubs’ shortstop, though that probably has more to do with the existence of Javier Baez than Castro. If I’m betting, though, I say Russell enters 2016 the Cubs’ presumptive starting shortstop, and the Cubs will maneuver pieces around him. Injuries or ineffectiveness can always change things, of course.

In case you were wondering, through 186.2 innings at shortstop this year, Russell rates as a solidly above-average defensive shortstop, though not as hugely above-average as he was at second base. That said, the samples here are minuscule, as far as defensive metrics go, so I wouldn’t use them to “prove” anything just yet. Instead, so far, all we can say is that the numbers match what we’ve seen with our eyes: Russell looks to be a pretty good defensive middle infielder.