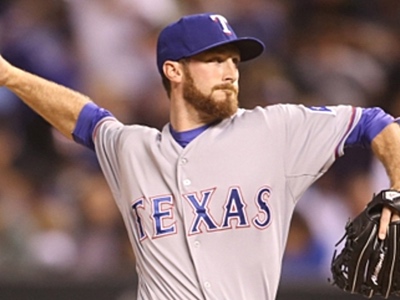 Last Friday night, the Chicago Cubs got our offseason juices rolling*, when we heard rumors that they would come together on a mystery trade with the Texas Rangers. Although it wasn’t a blockbuster for Cole Hamels or the like, the Cubs did find themselves acquiring a non-insignificant piece in righty reliever Spencer Patton. Here’s what Brett had to say at the time.

Patton, 27, was a dominating reliever in the Royals system until he was traded to the Rangers for Jason Frasor in July 2014. Thereafter, he’s seen some time in the big leagues with the Rangers with mixed results. His big league strikeout rate is a healthy 25.0%, but his walk rate is a borderline uncomfortable 9.7% (which had been an issue for him in the minors). He gave up 24 runs in his 24 big league innings last year, but that looks to be in large part because of a hellacious 20.0% HR/FB rate.

In return for the righty reliever, the Cubs gave up Low-A infielder Frandy De La Rosa. De La Rosa was an international signing a few years ago and an interesting switch hitter, but not a top 30 type prospect. However, like Spencer Patton, De la Rosa isn’t an insignificant piece. So if you’re looking to judge Patton based on the return, you can be mildly excited (or as excited as a trade for a right-handed middle reliever can make you).

Spencer Patton was selected by the Kansas City Royals in the 24th round of the 2011 Draft. He made his way through the Royals’ system as a reliever, posting pretty fantastic numbers along the way. At his first stop after rookie ball – straight to High-A – Patton maintained a 1.96 ERA (3.07 FIP). After doing that for 64 innings, he was promoted to AA, where he stepped it up quite a bit. Over his 18 innings at that level, Patton kept a tidy 1.50 ERA (2.28 FIP) before being promoted, once again, to AAA at the beginning of the 2014 season. His success then began to wane, as he reached the upper levels of the minors. In 45.1 IP for the Royals AAA team in 2014, Patton had just a 4.08 ERA (5.19 FIP), primarily due to a ballooning walk rate (11.7%) and an unusually high number of home runs.

On July 16, 2014, Patton was traded from the Kansas City Royals to the Texas Rangers for Jason Frasor. The Rangers sent him to AAA to get straightened back out, and he did so quickly. In just 16.0 innings, Patton came back hot with a 3.38 ERA, but a much more enticing (and career aligning) 1.95 FIP. His walk rate and number of home runs allowed became under control and he made his major league debut on September 4, 2014.

Unfortunately, that wasn’t the last Patton saw of the minor leagues, as he split time between the Rangers AAA and MLB team throughout the 2015 season. I’ll need you reserve your judgement, as I go over his numbers from the 2015 season. At first, they are going to look very ugly, but there is plenty of reason for optimism and I’ll get to that shortly after. Over his 24 IP at the major league level in 2015, Patton had a 9.00 ERA with an uninspiring 5.51 FIP. His ground ball rate was just 35.5% and his walk rate was 11.0%. Yikes.

However, over that same period of time, Patton posted a mere 48.5% left on base rate. That is an exceedingly low mark that is completely unsustainable. In the sequencing department, he got about as unlucky as anyone could possibly have gotten. Moreover, he had an equally unsustainable 20.0% HR/FB rate. While giving up deep shots and fly balls can hurt you, no one should expect 20% of them to leave the park (this is why his xFIP – 4.34 – is less than half his ERA). His BABIP didn’t help him either. At .317, his batting average on balls in play was a good deal larger than both his previous, and the league, average. While he must have been doing some things wrong, it doesn’t appear that his true talent level lies anywhere near the results from the 2015 campaign.

But, if you’re still feeling less excited about Patton’s abilities than you’d hoped to be at this point, it’s because I’ve left out the very best part: his elite strikeout rates. From 2011 – 2014, across four stops in MiLB, Patton posted a strikeout rate under 30% just once (29.6% in 2013 at A+). Immediately after that season, he had a 39.1% K-rate at AA for the Royals and eventually a 37.3% K-rate at AAA for the Rangers. Despite all of his struggles at the MLB level in 2015, Patton kept striking out batters at very interesting rate (25.7%) over 24 innings.

Given his elite – and more importantly, consistent – strikeout rate in the minors, it’s not hard to see why the Cubs were targeting Patton this offseason. Even throughout his poor performance in 2015, he was able to keep his strikeout rate well above average; that is one of the most useful plus tools a reliever can have. Given that his walk rates, groundball rates and home run rates were all much, much better in the minors, it’s not difficult to envision or project a relative breakout for Patton in 2016. Indeed, Steamer pegs Patton to come back with a 3.82 ERA (3.84 FIP) next season.

Patton, 27, was added to the 40 man roster for the first time back in September 2014, when he was an expanded roster call up for the Rangers. That means that he has an option year left in 2016 where the Cubs can send him back and forth between AAA Iowa and Chicago, as many times as they’d like, without fear of losing him. In that respect, you might look for Patton to begin the year in AAA, simply because the Cubs can afford to stash him there while holding on to other pieces that don’t provide the luxury. All in all, Patton’s total package – peripheral unluckiness, projected bounce-back, elite strikeout rate and remaining option year – is pretty desirable. Hopefully, the Cubs will be able to strike gold.

Patton alternates between a fastball (92.0 MPH) and a slider (82.4 MPH), and you can see more of his stuff in the videos below…

*[Brett: Michael coming right out of the gate with the unsettling visual.]