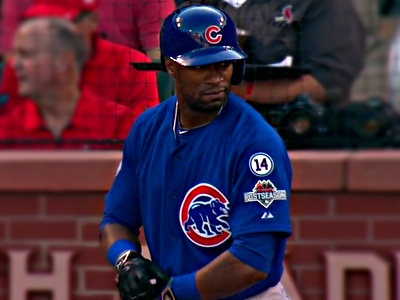 Although I know many Cubs fans have quietly been hoping for a last-minute, bargain Dexter Fowler return, the more realistic outfield reunion on a bargain free agent deal is probably Austin Jackson.

Which is not to say it’s likely.

The Cubs could definitely stand to add a player like Jackson to the roster, of course. With his decent bat from the right side (though he’s mostly platoon-neutral), and the ability to play good defense all over the outfield, Jackson is pretty much a dream scenario 4th/5th outfielder for a team that currently has just one plus defensive outfielder among its top four options – and he, Jason Heyward, is the only one of those four who can play center field.

So, when I say a reunion with Jackson is not likely, I’m not speaking out of fit or need – he’s basically perfect for the Cubs’ needs.

Instead, I’m speaking out of the fit from Jackson’s perspective. A career starter in the big leagues since 2010, the 29-year-old Jackson has had just one season – 2014 – with a WAR below 2.3, and three seasons worth at least 3.0. At his age and with his ability, that doesn’t sound like a guy who would have to settle for a bargain deal on a team looking to add a fifth outfielder. Assuming the Cubs hang on to Chris Coghlan, absent an injury to someone(s) in the outfield, it’s not clear that Jackson would even see a ton of playing time with the Cubs.

Yes, it would be fantastic to have him and be able to work him into the mix once or twice a week from the Cubs’ perspective, but there are many other teams out there that can probably offer him more regular playing time, which is probably of paramount importance to a 29-year-old who might have to take a one-year deal and try and score again next offseason.

I found it interesting, then, to see Jerry Crasnick report that the Brewers, Angels, and Rangers have “kicked the tires” on Jackson, and that the Cubs could still be a fit “for the right price.”

If the Cubs could somehow land Jackson on a reasonable deal, the extent to which they would have an embarrassment of roster riches is nearly inarticulable. Indeed, I’d have a hard time believing the Cubs could add Jackson without simultaneously planning to move another player (for example, Coghlan) out. Consider this: assuming the Cubs go with an eight-man bullpen (which I am presently very much assuming), they’ll have just four spots on the bench. The versatility of many players will help make that doable, but still, four is so few when you consider these are the bench options already: David Ross, Coghlan, Javier Baez, Tommy La Stella, Matt Szczur, Munenori Kawasaki, and a bunch of youngsters. Add Jackson to that mix, and it’s extremely crowded – moreover, you might be left with just one backup infielder on the roster (Baez).

Still, as we’ve said on the pitching side: the Cubs project to be so good in 2016, and have this serious window of contention that they can’t afford to blow because of an injury or two that was not covered by redundancies. In terms of big-league ready young outfielders who could step in, the Cubs are lacking in the upper minors. Billy McKinney and Albert Almora could be great eventually, but I don’t think either is quite there yet. Having someone like Jackson – a borderline starter – on the roster, even if in addition to Coghlan, gives the Cubs a ton of cover if one of their primary outfielders should be injured. Plus, it would allow them to rest guys even more in the early going.

I could go on, but I’ll keep coming back to the same place: of course you’d love to see Jackson back with the Cubs, and Crasnick’s report makes it sound possible. So we’ll see. I’m quite intrigued.

Meanwhile, the other former Cubs outfielder who is looking for a job still has love for his Cubs teammates: