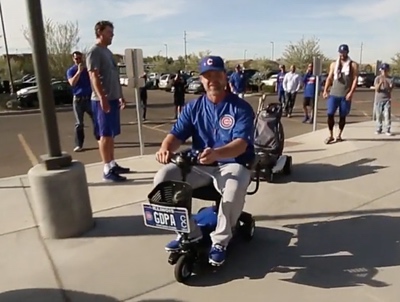 David Ross is having himself something a swan song season.

The 39-year-old career back-up catcher is swinging the bat as well as he ever has, hitting .261/.357/.493 on the year with four homers (after hitting just one all of last season).

That fourth homer came today, and it was a big one. The 100th homer of Ross’s career, which is pretty special for him to get in this final season:

You get a well-deserved curtain call after a milestone blast like that:

The homer was also pretty important in the game, coming with two on and the Cubs holding onto a one-run lead at the time.

Oh, and it was a serious blast:

It wound up on Waveland after hitting the Nuveen sign in left, so hopefully someone will be getting that ball to its rightful owner.