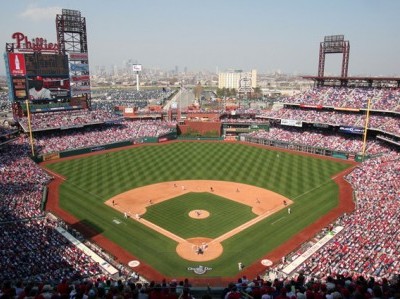 So the Albert Almora era begins, albeit with a fairly significant bittersweet taste. And no start.

If you somehow missed the news, Jorge Soler is indeed heading to the 15-day disabled list, while Almora was called up to take his place on the roster. He isn’t starting tonight, but with a sufficient late lead, I wouldn’t be surprised in the slightest to see Kris Bryant head back to third base, and Almora come in as a defensive replacement. The jury is still out on whether he’s ready to handle Major League pitching, but there is no question his glove is ready to wow us on baseball’s biggest stage.

Tommy La Stella draws the start at third, as does Miguel Montero behind the plate. As Brett said earlier, Maddon is loading the lineup with lefties tonight, at least in part, because the opposing pitcher, Jared Eickhoff, has fairly dramatic splits against lefties (.358 wOBA) and righties (.250 wOBA).

Opposing Eickhoff for the Cubs, is increasingly good righty Kyle Hendricks. I recently wrote about Hendricks’ success in 2016, after he dominated the Dodgers and Phillies lineup the last two times out. Of course, having just seen these very Phillies just over a week ago may not be the best thing for a pitcher who has been slightly more susceptible the third and fourth time through an order than other pitchers around the league throughout his career. Even still, Hendricks has just a 2.18 ERA through his past seven starts. He’s been really good (aaaaand I jinxed him).

A win today will give the Cubs a series win overall, which would represent their fifth straight series win since the Cardinals series on May 23. You can’t win every game, but taking the season a series at a time is the best way to remain focused and push forward. Let’s see if the Cubs lock this one down tonight.