No Cubs Baseball Today, But How About that Jason Heyward Throw? Skip to content 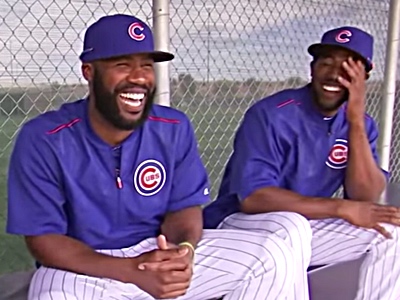 Unfortunately, today is one of the worst days of the season, because there’s absolutely no (big league) baseball. To me, the day after the All-Star Game is right up there (in terms of annoyance) with the day off immediately following Opening Day (yuck).

But just because there’s no live baseball doesn’t mean we can’t relive some of the stuff that happened in the last series, right?! Right.

Remember earlier this season, when Javy Baez made probably the most incredible play we’ll see all year … and didn’t even record an out? That was pretty cool, even if it is just Javy doing Javy (although, lately he’s done a lot more than that). Well, his teammate and fellow fantastic defender (who’s also been heating up with the stick lately) Jason Heyward had a similarly amazing non-play that you may have missed in the last series with the Pirates.

Heyward’s came in the bottom of the 7th inning and it almost preserved the Cubs lead. With runners at first and third and just one out, Andrew McCutchen stepped up to the plate with his team down a run. Then, on the second pitch of the at-bat, McCutchen sends a fly ball down the right field line that – with any other right fielder – would be an obvious sac fly, probably not even meriting a throw … but with Heyward, well, just look how close he got:

Heyward caught that ball just a few strides south of the warning track and in foul territory, yet he still comes within inches of nabbing Josh Bell at the plate. That required not only incredible arm strength, but also accuracy, body positioning, and body timing.

I know you may be thinking “Yeah, well, he didn’t make the play,” and that’s fair, but I’m not sure if there are ANY active right fielders that would gotten even remotely close. Most, I’d argue, wouldn’t have made the throw.

Of course, the runner at first (Starling Marte) did advance to second on the throw (and has good speed), but he didn’t get further than that and the Cubs went onto win 6-5. That was just another freakin’ awesome play by a Cubs’ defender that didn’t result in an out. One of these times, in one of these big situations, it will. And we’re going to lose our minds.