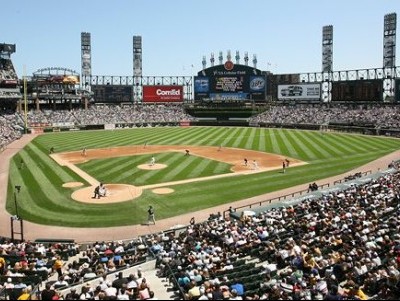 Since the All-Star Break, the Chicago Cubs have won three straight series, traded for a left-handed reliever in Mike Montgomery, and traded for one of the most dominant closers in baseball in Aroldis Chapman.

Not bad for a couple of weeks’ work.

Now they’ll head to the South Side of Chicago to start a two game series against the White Sox … that will immediately lead into another two game series on the North Side. Let’s just call it a four game series.

Starting for the Cubs tonight is 2015 NL Cy Young award winner Jake Arrieta. Arrieta had a nice start his last time out – his first since before the break – and he’ll look to build upon that tonight. With Miguel Montero catching, Willson Contreras steps out to left field, Jason Heyward will take over the center field duties – as Dexter Fowler DH’s – and Ben Zobrist steps out to right – with Javy Baez filling the spot at second base.

Starting for the White Sox is righty Miguel Gonzalez. Gonzalez has struggled this season, his first with the White Sox, and doesn’t look to have an easier go of it tonight against a tough Cubs lineup. He has been slightly tougher on righties for his career, but not by a noticeable amount – which is why the Cubs lineup is fairly standard. He’ll throw to former Cub Dioner Navarro (remember him?).