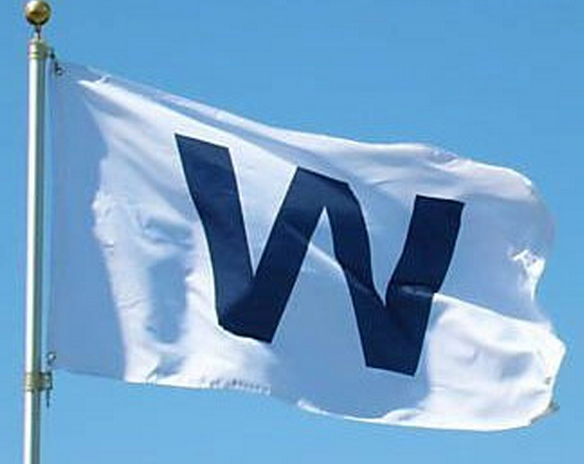 With Brett fast asleep (tired from the 39 hour #BNBlogathon), I thought I’d pop up a brief post-game thread, to discuss and celebrate the Cubs victory tonight over the Marlins.

While it may not have matched the insanity of last night’s win over the Mariners, the Cubs win tonight was a really great one.

There were offensive contributions up and down the lineup, more than a handful of defensive gems, three (3!) challenged plays decided in the Cubs favor and, last but certainly not least, a Kyle Hendricks complete game shutout. Let’s take a moment to examine some of the best individual offensive performances:

Heyward hit the ball hard all night, winding up with two hits including a double; Willson Contreras couldn’t stay off the bases; Anthony Rizzo reached five times, coming just a homer short of the cycle, and Dexter Fowler reached three times overall. Even Kyle Hendricks had a hit and an RBI. Kris Bryant was really the only one not getting in on the fun (0-5).

To be fair (well, not to Bryant), the Marlins pitcher, Adam Conley, looked hittable right out of the gate and was struggling with his location, especially early on. Ultimately, the Cubs chased him out before he even saw the fifth inning. Although he had only given up just two runs to that point, the Cubs had tagged him for five hits and six walks. It … wasn’t working out.

But Kyle Hendricks was the star of the game, tossing a 7 hit, 3 walk, 5 K shutout over the Marlins. It was the second shutout of Hendricks’ career – the first came early last season – and he’s continued to look especially great since the beginning of July. We’ll certainly have more on him and his start in the morning.