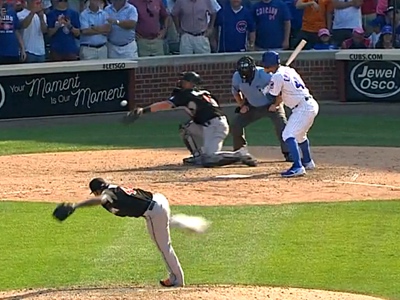 Down 4-1 heading into the bottom of the eighth yesterday, the Cubs’ win expectancy against the Marlins was under 8%. With two innings to play, teams rarely come back from a three-run deficit.

Still, the Cubs rallied on the strength of a Miguel Montero double, a Javy Baez single, a Matt Szczur walk, and a Dexter Fowler sac fly to right (on which everyone tagged up – especially impressive from Szczur at first base), which brought the Cubs within one run. The tying run was on third, and the winning run was on second.

But Kris Bryant was called out on a pitch a good four inches off the plate, and the Cubs were down to their last out.

After an intentional walk to Anthony Rizzo, though, the stage was set for a crazy way to tie and win the game, without the benefit of a ball in play – a walk to Ben Zobrist, and a wild pitch with Willson Contreras up.

Watch the whole inning here if you missed it: