A Good Thing You Haven't Noticed: A Look At Jorge Soler's Defensive Progress Skip to content 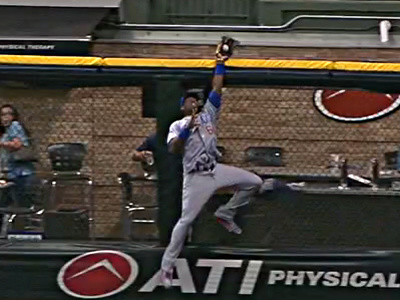 Jorge Soler made his 46th start in left field on Saturday in a season in which his defense at a new position has mostly flown under the radar.

Soler logged 1,030.2 innings as a right fielder in his first two seasons as a pro before Jason Heyward’s offseason signing moved him off his original position. It has not been a particularly smooth transition for Soler at times [Brett: I can still see the little glimpses we got of him in left field in Spring Training and I shudder], but things could be considerably worse.

Soler has played 337 innings in left field, making him one of 43 players to reach 300 defensive innings at that position. Browsing through his Inside Edge Fielding stats via Fangraphs, Soler has made 98.2 percent of plays categorized in the 90-100% range and 100 percent of plays that fit into the 60-90% slot. Further, Soler is one of 12 left fielders who has made at least 90 percent of 60-90% and 90-100% plays. For what it’s worth, teammate Kris Bryant is also on that list of left fielders.

(Aside: This feels like a good time to note that Bryant has played a superb left field, where he ranks third in both UZR/150 and Defensive Runs Above average, sixth in UZR, and has 2 DRS, which ranks 12th among left fielders who have played 300 innings in left. Not bad for the regular third baseman.)

Without heaping too much praise for defense at a position that rates on the lower end of the defensive spectrum, Soler is making a great majority of the plays left fielders are expected to make. All things considered, it is encouraging he has done that given that there have been times where he hasn’t looked the part of a serviceable outfielder.

And while Soler is doing enough to not make a mockery of himself on baseball’s best defensive team, there are still improvements to be made.

Comparing this all to last year, and you can see the improvement.

Still, while there has clearly been improvement this year, the Cubs have been cautious.

While these numbers can serve as a reminder of the Cubs’ defensive depth and flexibility, they also point out that Soler is still a work in progress at age 24, and the Cubs acknowledge it.

On the balance, though, you probably haven’t noticed much of Soler’s defense in the outfield this year, and that’s a step in the right direction. Given his youth, further improvement is possible.