By the Numbers, the Cubs Should Be All Over Gold Glove Finalist Lists Skip to content 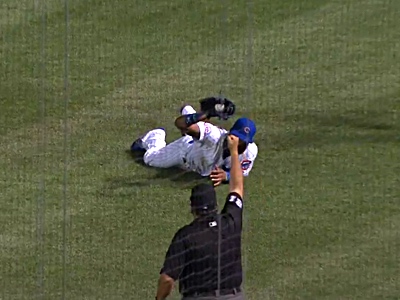 Any given team in any given year will have a number of compelling storylines drawing the interest of the fans and the notice of analysts.

The 2016 Cubs, for example, had (among many other things) the meteoric rise of Kyle Hendricks, the uneven season of Jake Arrieta, and the season-ending injury to Kyle Schwarber.

One of the more pleasantly unexpected narratives, however, was the Cubs’ historically great defense almost across the board. Not only were many different Cubs (esp. Jason Heyward, Addison Russell, Javier Baez, and Anthony Rizzo), providing highlights on a nightly basis, the overall hit/run prevention transformed a great starting rotation into the very best in baseball.

As you can then imagine, the Cubs are expected to be well-represented in the Gold Glove award voting when all is said and done after the playoffs.

In fact, if you simply take a look at individual defensive performances by the numbers (like August Fagerstrom did right here at FanGraphs) you’ll see a number of Cubs littering the top of the leaderboards.

I didn’t list the positions for which the Cubs did not place a defender among the top three, and yet somehow there are still six (Seis!) positions listed above. Moreover, had Miguel Montero played just a few more innings this season (in other words, enough to qualify) he would have ranked third among all catchers. Wow. Having one of the top three defenders at seven out of nine positions on the field is utterly ridiculous.

Going by the numbers alone, the Cubs should take home the award at first base and right field, while standing a fighting chance at pitcher, second base, and shortstop. You might be surprised to see Baez’s name in there at second, but remember, Fagerstrom only used players that were actually eligible to win the award, so he is technically a candidate (although, I strongly doubt he’ll take it home given how much he moved around). It’s even more impressive how he rates, given his limited time there. But you already knew Javy Baez was special.

Unfortunately for Kris Bryant, Nolan Arenado might steal another bit of recognition from him (in addition to the NL Home Run Title), but I think we’re all plenty happy that one of the game’s best hitters also happens to be one of the top three defenders at his position in the NL.

Be sure to head over to FanGraphs for more details, statistics and commentary on each of the positions from Fagerstrom. It’s a great read, there’s plenty more there, and it’s well worth your time. The Cubs defense has been great, friends, and it continues to shine this October.