Corey Kluber, Game Seven, and the Importance of Anthony Rizzo Skip to content 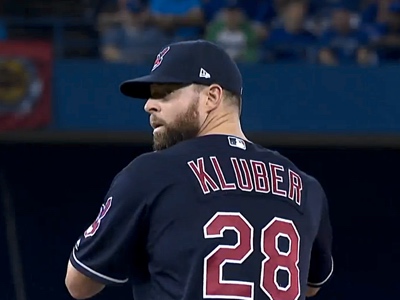 The Cubs’ boogie man of sorts, the last big hurdle in their search for a World Series title, takes the mound tonight for the Cleveland Indians in his third start of the 2016 World Series.

But it’s not only his third start against the Cubs in rapid succession – a trying feat in its own right – it’s also his second consecutive start on short rest (just three days).

Being capable of pitching on short rest and actually performing well on short rest is a big distinction. Of course, it’s also one we’d hope would be an issue in Game Four of this very World Series. And. Well.

Although doing it twice in a row (and facing the same lineup for the third time) should give the advantage to the Cubs, I don’t want to go down that route today.

Instead, let’s just take a look at Kluber’s performance and pitch selection in Games One and Four of the World Series, how he attacked a certain hitter (Anthony Rizzo), how Rizzo adjusted, and what that might mean for the Chicago Cubs.

Kluber first pitched in Game One of the World Series at Progressive Field. And although I enjoyed my overall time at the game that evening, I can tell you the Cubs hitters did not. Kluber dominated the Cubs almost immediately and they failed to muster anything close to an offense on the road.

Kluber jumped on the Cubs right away, working a one-two-three first inning, which featured a pair of strikeouts (Dexter Fowler and Kris Bryant) and the first of three straight infield pop-ups from Anthony Rizzo (it was an especially tough game for Rizzo):

Kluber used five different pitches that night, but threw only four change-ups and 10 four-seamers. In other words, he moved the ball … a lot. In just 6.o innings of work, he collected 10 whiffs and 59 strikes against just 29 balls. The majority of his damage came against his slider (5 whiffs). He also caught the Cubs looking at strikes on the edges repeatedly.

After the Cubs evened things up in Game Two and dropped Game Three at Wrigley Field, Corey Kluber pitched once again in Game Four of the World Series. Although it wasn’t quite as dominant as his Game One performance, Kluber still performed quite well against a team that just saw a heck of a lot of him.

In this one, while still a loss, the Cubs were quite clearly a lot better against Kluber. They notched one more run, one more hit, one more walk, three fewer strikeouts and three fewer popups. Altogether, that is a team that was seeing the ball much better than they were in Game One. Obviously, the Cubs are hoping for a lot more than that tonight, though.

In this start, Kluber eliminated his change-up altogether, and once again leaned heavily on his slider. Against two more batters, Kluber recorded 11 whiffs (7 with the slider) and 59 total strikes in just 81 pitches. So, yeah, that slider.

Let’s narrow in on one key offensive contributor for the Cubs, Anthony Rizzo, and see what and how Kluber attacked him both in games one and four. If the Cubs are going to win tonight, they’ll need some help from this guy, after all, but Rizzo seems primed for a big night.

In game one against Kluber, Anthony Rizzo went 0-3 with three straight infield (or foul territory) pop-ups. Kluber – unfortunately, but clearly – had Rizzo’s number. But that doesn’t mean there’s not a lot to learn. Out of the thirteen pitches Rizzo saw in Game one, seven were sliders, five were sinkers, and one was a curveball. Rizzo got himself out on the sinker every single time.

But Rizzo clearly learned something and adjusted very quickly in Game Four, getting on base off Kluber three straight times.

In the first at-bat, Rizzo was waiting on the slider and hit a run-scoring line drive single. In Rizzo’s second at-bat, Kluber changed things up by throwing two curveballs, but plunked Rizzo when he tried to go back to the sinker. Finally, in his third at-bat, Kluber tried to go back to the sinker once again – remember, this is the pitch that got Rizzo to pop-up three times in Cleveland – but Rizzo was ready for it and hit a double to left field.

Herein lies the difficulty of facing the same lineup, multiple times in a row. You might be able to fool a guy like Anthony Rizzo in one game, but really good hitters remember and, more importantly, adjust. The Cubs, fortunately, have a lot of good hitters.

But I want to keep this on Anthony Rizzo for a moment, because I believe he might be the key to tonight’s game. After an ugly performance in Game One, Rizzo has been on base 12 times, including each of those three at-bats against Kluber in Game Four. If he can continue to adjust on the fly and remember how Kluber’s attacked him in the past, Rizzo – the Cubs’ likely cleanup hitter – could be set up for another huge night at the plate. (And, for what it’s worth, Kluber has struggled more against lefties (.316 wOBA) in his career than against righties (.266 wOBA)).

So I guess what I’m trying to say is that, yes, Kluber is very good and has beaten the Cubs twice, BUT he very well could struggle against everyone given the short rest and repeated exposure, especially Anthony Rizzo. On any other night, you go, we go, is about Dexter Fowler. Tonight, it’s all about the heart and soul of this lineup and team, Anthony Rizzo.