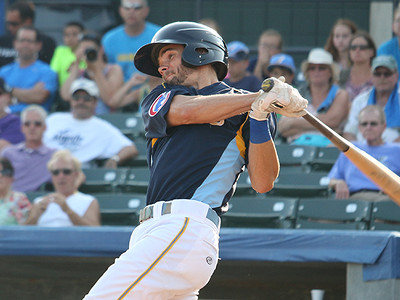 When the Tennessee Smokies completed their season in early September, I thought utility infielder Chesny Young had claimed the Southern League batting crown, with an average of .303. The Smokies thought the same thing. I think I can safely say that most folks who followed minor league baseball thought Young had won the second consecutive Double A batting title for the Cubs (Willson Contreras took home the honors in 2015).

And we were all wrong.

Due to a completely valid, little known, and rarely needed rule, Young actually finished second. There was another player who did not quite have enough at bats to qualify, but the rules allowed his average to be calculated as if he had had those at bats, but was hitless in them. That calculation crowned a different champ. Young’s almost-crown became a curiosity that was quickly forgotten as bunch of former Tennessee Smokies made history on a rainy night in Cleveland.

Curiosity aside, Young had a very good season and should now be considered a prospect worth remembering. By the end of 2017, he could be in Chicago himself.

Young, 24, spends most of his time at second base, but the Cubs have moved him around the diamond (particularly in his time with the Smokies), likely in preparation for a career as a Major League utility player. I have no concerns about his ability to handle second on a regular basis (provided no one is expecting Javy-Baez-level wizardry), and I have no bad reports on his work at third. He did not seem as comfortable at shortstop, but I think he would be serviceable enough to fill that role off the bench. Left field is no problem for him; Tennessee sent him to left for eight games last year, and I expect he will get more experience in the outfield in Spring Training and with Iowa.

The Cubs do not need Young to play every day at any of those positions in Chicago anytime soon, so the best plan for his defensive development is probably to keep moving him around and to keep him comfortable in the ‘where needed’ role. Young would have difficulty cracking the Cubs lineup as a regular starter, but thanks to his bat he could stake a claim to a bench job by the end of 2017.

Simply put, Young is one of the best pure hitters I have laid eyes on. Since being drafted in 2014, Young has hit his way to Tennessee and has yet to really be challenged. With over 100 Plate Appearances at each stop (much more in the higher two), Young posted a wRC+ at each of the first three full season leagues of 127 (Low A), 133 (High A), and 126 (Double A). His strikeout rate has ticked up a little over that span, but so has his Isolated Power, and I wouldn’t be surprised if the increase in K% has more to do with him working to raise his ISO than with him having a hard time handling more advanced pitching.

Young’s Tennessee line of .303/.376/.387 suggests he is a patient, high walk, low strikeout hitter without much power, and the peripheral numbers almost confirm that. Certainly there is no arguing with his walk rate (10.3%) or strikeout rate (11.6%) in Double A. Those are excellent figures, and they are among the most important when evaluating a minor league hitter.

But there is a catch. Like any good prospect, Young continues to work on his game while in the minors. Minor league numbers should not be viewed as just a static line; we should also take into account the trend lines, look for aberrations – positive or negative – and factor those trends into our expectations.

In the case of Young, his lack of power is definitely the biggest red flag on his resume. Although the other numbers last year were excellent, the .084 ISO could suggest a problem going forward. (Young also hit very well in the Dominican Winter League this year, batting .351 with a .438 OBP. In 77 at bats, however, he had just one extra-base hit, a double.)

We can probably assume, then, that the Cubs coaches would be working with Young to maximize his power. He’ll never turn into a Bryant-esque slugger, but if the Cubs can turn some singles into doubles at the cost of an extra few strikeouts, that tradeoff could make Young a dramatically more valuable hitter. Remember: the value of slugging is not just the extra bases picked up. There is also significant value in the form of keeping defenses honest, and forcing pitchers not to simply cruise in the strike zone.

Sure enough, Young’s slugging percentage ticked up steadily from May through the end of the year, capping out at .473 in the August (he actually had a higher SLG in April thanks to a pair of homers, but it fell steeply from April into May). In the month of August, Young hit ten doubles; he hit just fifteen the entire rest of the season.

If the steady uptick in SLG and the surge of doubles in August is indicative of Young refining his offensive game to maximize what power he has, then it becomes easier to see his usefulness off the bench translating to the Majors. A versatile, right-handed bat that is tough to strike out and has at least enough power to keep the outfield from cheating in is a nice weapon for a manager to have late in games.

Even if we don’t factor a little additional power and a few more doubles into Young’s projections, his current big league Steamer projections are perfectly fine for a utility bat off the bench. As a guy who has yet to spend a single game above Double A, Steamer projects a theoretical Major League line for Young of .268/.325/.348, with a walk rate of 7.4% and a strikeout rate of 13.4%. That’s good for a wRC+ of 82. Given his positional flexibility, that is the kind of line that could compete for a 25th man slot on a big league roster.

Instead, though, Young will head to Iowa in April, further refine his already good offensive game, show us whether the increase in doubles is sustainable, gain additional experience at four or five defensive positions, and be ready when or if the Cubs need reinforcements during the 2017 season.

And that’s not all Young can do, by the way.

In April of 2016, Young stole 11 of 13 bases for Tennessee. The entire rest of the season he attempted just 15 more steals, and succeeded in only 5 of them. I’m not sure why he stopped running, but if I had to guess, I’d go with ‘minor injury’. Keep on eye on Young on the basepaths in Mesa and in Iowa. As a low-strikeout utility player, even a light-hitting one, he has bench value. If he can bring a legitimate threat to steal to the party as well, Young might just become a key part of the Wrigley bench for a number of years.