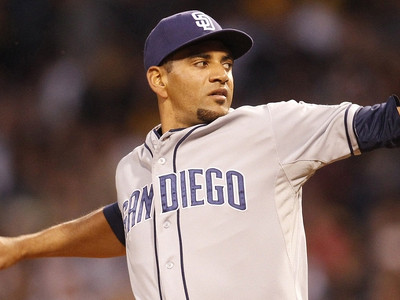 At last check, the Chicago Cubs were among many teams interested in rehabbing righty Tyson Ross, who was a front-end starter when he was healthy with the Padres, but missed virtually all of 2016 with shoulder issues, and wound up having surgery to correct thoracic outlet syndrome. Ross was non-tendered by the Padres, leaving him something of a reclamation belle in the offseason ball otherwise bereft of starting pitching.

The Cubs reportedly brought Ross in to Chicago last month to show him their facilities, so it’s clear they have serious interest. How much Ross returns that interest, and how seriously involved other teams are, has been somewhat opaque.

The Rangers, however, have been one of the mentioned possible suitors since day one, and it sounds like they are very serious in their pursuit.

TR Sullivan reports that Ross visited with the Rangers today, and they are “making a significant push to land” him.

As we discussed with the Cubs, the Rangers have the ability to offer Ross a competitive team, while also demonstrating a pretty clear need in the rotation, while also being able to survive without him for the first month of the season if he’s still getting ready. Very few teams can claim all three things.

The Rangers’ hole at the back of the rotation is even more obvious than the Cubs, though, if I’m being honest. Cole Hamels and Yu Darvish will head things up, and Andrew Cashner and Martin Perez will likely be in the middle. But that fifth spot is quite clearly available. With the Cubs, that fifth spot is currently occupied by a guy – Mike Montgomery – whom the Cubs probably really do want to see get a lot of starts in 2017, so at least they know what they have in him going forward. (And, as we’ve discussed at length, there are reasons to believe Montgomery could finally really break out as a starter.)

Sullivan is not alone in his report about the Rangers making a push, either. Evan Grant reports similarly that negotiations are taking place.

The Cubs aren’t out of this thing, though. Jon Heyman notes that there are at least six clubs still in the running, though he names only two explicitly: the Rangers and the Cubs.

It had long been thought that Ross, because of his surgical recovery process, could take a good long while before making a decision, but it might come sooner than we’d expected.

Even if Ross would prefer to take the decision deep into the offseason, it’s entirely possible it will be out of his control. It’s not at all difficult to imagine a suitor or two that wants him first (as whatever they’re viewing him as), before turning to back-up options at the end of the offseason. Those teams may force the issue on Ross by simply requiring him to make a decision by a certain time, or they will move their offer elsewhere. Then, the pressure is on Ross to make the best possible decision he can, maybe sooner than he’d like … or roll the dice that a better offer will still be there come February or March.

What will that final contract look like? That’s a particularly tough one to peg from the outside.

It’s not hard to surmise what is probably going on with respect to the offers behind the scenes: the involved teams will want to secure multiple years of control (preferably via team options), and Ross is probably looking for the best one-year deal he can get, assuming there is no significant multiple year deal on the table. Within those confines, all sides will twist and contort and try to make a fit that’s both palatable to the team and attractive to Ross. It’s probably a really fascinating fly-on-the-wall situation. Maybe the compromise is a lower salary for 2017, and then a team option for 2018 that comes at a very high rate.

In any case, it sounds like the situation is escalating. Stay tuned.