Remember When Jon Lester Dominated the Dodgers? (Yes, Brett, But Which Time?) Skip to content 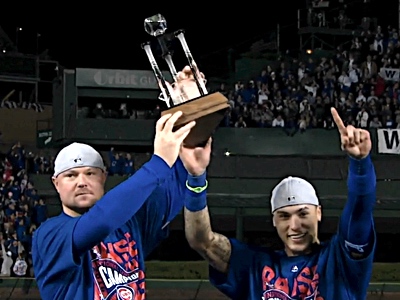 It’s when he came off the empty bench as a pinch hitter, executed a perfect suicide squeeze bunt to score Jason Heyward in the 12th inning, and walk the Cubs off of one of the craziest games I’ve ever seen:

On the mound, though, while Lester may have not equaled that moment in any one *particular* moment, his season was otherwise such a steady show of impressive consistency that he was a finalist for the Cy Young Award.

His best game of the year came in early June against the Dodgers. After allowing a barely-got-out leadoff homer to Enrique Hernandez, Lester didn’t allow a thing:

On the game, which Lester completed, he gave up just three more hits, walked no one, and struck out ten. It was an incredible outing – Lester’s best on the year – and presaged an NLCS match-up in which Lester could feast on the Dodgers’ lefty-heavy lineup.

In that NLCS, Lester started twice against the Dodgers, who managed just nine hits and two walks over the 13.0 innings they tried and tried against Lester. The Cubs won both of those games (both were 8-4, in fact (bonus fun fact: the Cubs lost only one of the six postseason games in which Lester appeared, Game One of the World Series)).

In 28.0 total innings against Jon Lester in 2016, then, the Dodgers managed just three runs.

Lester took home co-MVP honors in the NLCS with Javy Baez, and the Dodgers took home nightmares of having the face Lester again someday in the postseason.