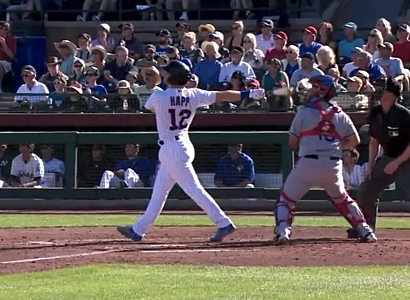 After being just one of two Cubs prospects on FanGraphs’ latest top 100 and coming in for some nice praise on his recent success this Spring (like, before today), Happ went ahead and hit himself a nice, deep, two-run home run to right-center field.

And Cubs Twitter sure is having fun with it:

If you’re keeping score at home, that’s Happ’s third homer of the Spring, which leads the Chicago Cubs. Happ wasn’t done yet, though. Later in the game he added a single up the middle, giving him a nice 2 for 2 start to the day.

And as a friendly reminder, this Cubs prospect is hitting .448 this Spring … and he’s a switch hitter … with a great eye … who can play multiple positions in the infield and outfield. Oh, and he’s just 22 years old, but should be starting out at Triple-A in 2017.

In other words, he’s just a phone call away from Chicago.