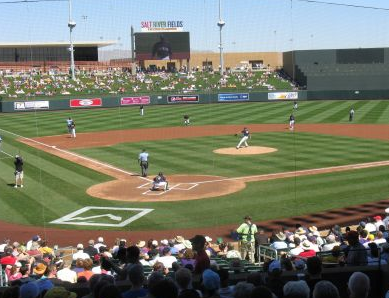 This afternoon, Jake Arrieta and the Chicago Cubs are squaring up against Zack Greinke and the Arizona Diamondbacks.

Greinke’s been dealing with some velocity issues this Spring – after a forgettable season in 2016 – but looked a bit better in his last outing (hitting 92 MPH, after averaging just 88 MPH the start prior).

We’ll have to see how he looks today, because if 2017 is anything like last year, the Diamondbacks are going to regret that $200+ million deal even more than they probably already do.

Arrieta, on the other hand, is business as usual. As always, he’ll be working on improving his command, and keeping the feel for his pitches throughout the entire game. As we discussed earlier, the Cubs lineup features mostly regulars, plus three guys fighting for the last spot on the bench. It isn’t an even race, but those are the clear frontrunners.

Today’s Cubs’ game is not being broadcast on TV. The Cubs-based audio will be available at MLB.com. For future reference, you can check which games will be televised here.