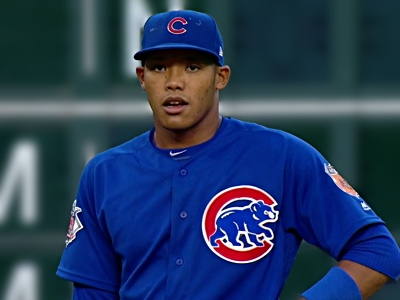 So far this season, Addison Russell is hitting just .250/.264/.442, with an 87 wRC+. Were that to continue the rest of this season, that would mark a lower wRC+ than his rookie or sophomore seasons.

… and yet I’m fairly encouraged by the small sample performance so far.

This early in the year – 53 plate appearances – there’s very little you’d look at to comment upon whether a player is performing well or not. The vagaries of BABIP are exaggerated in small doses, the sample of pitchers/ballparks is tiny, and little blips here and there can exaggerate the slash line in extreme directions.

But when it comes to plate discipline and swing rates, you do start to see trends as early as 75 to 100 plate appearances. In other words, we’re getting close to being able to comment meaningfully on some things. When we do, we might find some really interesting things for a 23-year-old player with big offensive upside who is still developing.

For example, so far, Russell has posted a scant 1.9% walk rate, which is not great. On the other hand, he has a mere 13.2% strikeout rate, and I’ve got a feeling that one winds up closer to Russell’s final number this year than the walk rate. (For what it’s worth, part of the reason Russell’s walk rate is so low is that pitchers have pounded the zone against him so far, with a zone rate up nearly 10 percent from last year.)

That 13.2% strikeout rate might seem like an extremely low number to be sustainable, but consider: (1) that comes along with a dramatically reduced rate at which he’s swinging at pitches outside the strike zone (22.2% after being at 31.6% last year), (2) his contact rate is up five and a half percentage points, (3) after his rookie year strikeout rate of 28.5%, Russell cut that figure to 22.6% last year, and (4) in the minor leagues, Russell’s strikeout rate was routinely in the mid-teens, despite him always playing young for his level. We may not think of Russell as a prototypical “high-contact” guy, but perhaps he will be.

Moreover, if he’s able to pair that high-contact ability to improving power – as is expected – he will become an offensive force.

And that’s exactly what Russell is expecting to become.

“This year, I came in with the mentality that I feel like I’m a threat in the lineup,” Russell told CSN. “It’s just important to get myself in good hitters counts, which I feel like is the key to success in the five-hole – getting a good pitch to hit. That’s what I feel like I’m doing.”

The various discipline rates bear watching, because all can point to just how well Russell is doing at waiting on his pitch. When the swing rate is down outside the zone, and the contact rate is up in the zone (both are true for Russell this year), it’s a signal that a hitter is maturing not only in his pitch recognition, but also in his swing.

Generally speaking, when you make contact with strikes and lay off balls, power goes up, strikeouts go down, and walks go up. All are very good things, and all are possible Addison Russell trends for the very near future.