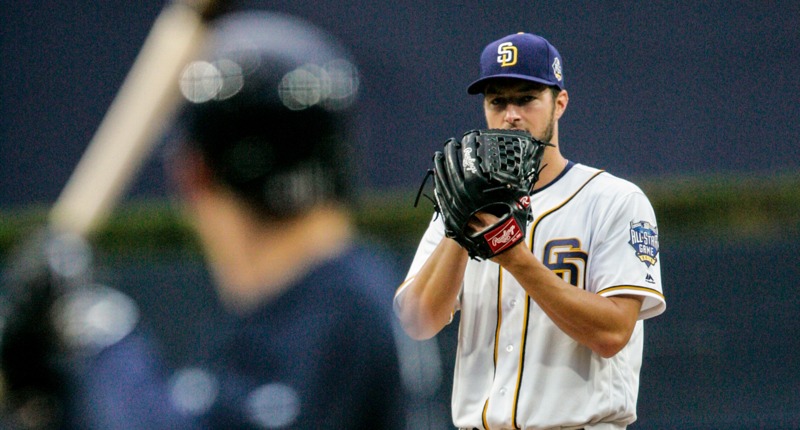 Back near the end of November, the San Diego Padres designated righty Colin Rea for assignment in a flurry of 40-man roster maneuvering moves. Now, the Cubs appear to have signed him to a Minor League deal. Woo hoo for rehabbing project pitchers!

Let me celebrate what I can at this point, people.

You might recognize Rea’s name, in large part because of the now infamous trade between the Padres and the Marlins from 2016, wherein the Padres were apparently hiding important medical information on Rea. Indeed, the right-hander made one start for the Marlins just after the trade, before the team learned he’d soon need Tommy John surgery (those naughty Padres). The two teams eventually worked out an agreement to send Rea back to San Diego (which tells you everything you need to know about the Padres acceptance of guilt), and he hasn’t pitched in the Majors since.

So what happened next? Well, Rea, 28, missed the entire 2017 season while rehabbing, but made 15 starts (plus three relief appearances) between Double-A and Triple-A with the Padres this past year. However, the results and peripherals were quite poor, which, when combined with the fact that he was only just returning from surgery, strongly suggests this is a pure scouting pickup – but hey, there’s not nothing here.

Back at the height of his prospect status (2015), Rea was a top-10 type in a solid Padres system – and for good reason. During his first stint at Double-A, he posted a 1.08 ERA and 2.35 FIP through 12 starts with a 3.9% walk rate and a 49.5% ground ball rate. Naturally, that earned him a promotion to Triple-A, but sadly that’s where everything started going downhill (4.39 ERA, 4.65 FIP). Despite the struggles, the Padres promoted him to the big leagues, where he made six moderately successful starts (4.26 ERA, 3.45 FIP).

Rea – a fastball (92-93 MPH), cutter, curveball, split-finger guy – made another 19 big leagues starts in 2016 before the injury, but the results weren’t any better (4.82 ERA, 4.63 FIP). In hindsight, we know that he was heading towards Tommy John surgery, so it’s not as though he was at his healthiest, but still.

There was also a glimmer of success at the end of the year, when Rea was furthest out from surgery:

Rea’s overall numbers from last year were not good, but here’s to guessing the Cubs saw something in late season scouting that piqued their interest. Because Rea’s last 5 appearances, all in AAA, were very good: 20 IP, 13 H, 1.80 ERA, 10 BB, 23 K.

The Cubs, it seems, are taking a chance on a full recovery and a little on that past pedigree.

Fortunately, they don’t really need Rea to be anything special any time soon. Primarily, he will be a project for the Cubs Minor League coaches and infrastructure, who do this sort of thing year in and year out, like every team. Most of the time, nothing useful comes from it. But every now and then, you get a serviceable pitcher as a depth piece. And once in a good long while, you find something special. With nothing more than a Minor League deal in hand, this is about as low risk as it gets.

So basically, my advice to you is this: hope he becomes something, but expect he becomes nothing. And in the meantime, I can admit that although these moves are extremely common, they do seem to be a bit more annoying when the offseason is going the way this one has.