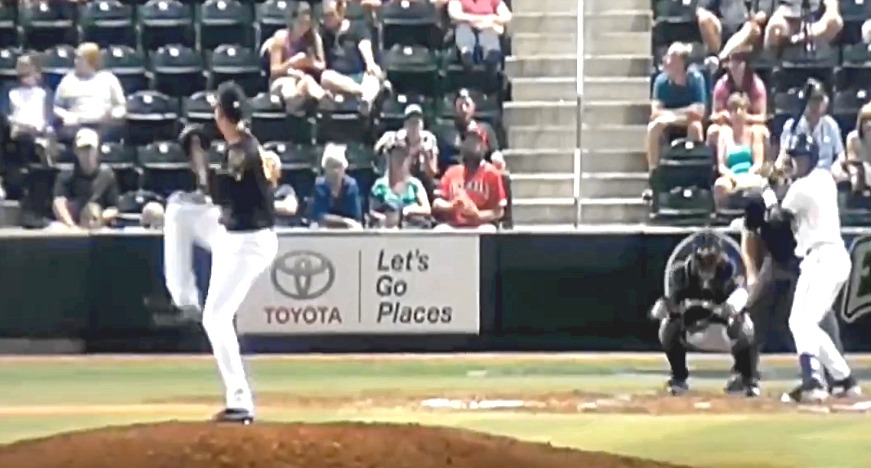 The Cubs Minor League system is at a tipping point heading into 2019. They have a couple of back-end top-100 types in Miguel Amaya and Nico Hoerner, who have an outside shot of being mid-top-100 types by mid-season, and probably another 4-5 guys who could enter the mix for the top-100 around mid-season if they have huge starts to the season.

Of course, that’s not particularly unique to the Cubs, but given how few top prospects they’ve had over the past two+ years, it does represent, for the first time in a while, their first real shot at having a legitimate mid-tier (at least) farm system again. That’s cause for optimism.

Among the most interesting names trailing just behind Amaya and Hoerner is lefty Brailyn Marquez. In fact, according to Baseball America he’s the Cubs third best prospect as of today, and Baseball Prospectus had him a few spots lower than that. Indeed, Marquez name has been generating buzz all offseason long, and why not after posting a 3.21 ERA, a 26.4% strikeout rate, and a 52.4% ground ball rate through 10 starts as a 19-year-old in low-A, all while hitting the upper-90s with his fastball.

Marquez, who got love from the Cubs’ development execs at Cubs Convention, even got a call-up to A-ball at the end of the year, throwing 7.0 more innings of two-run baseball with 7 strikeouts and 2 walks.

I mean, get a load of this guy:

Ho hum, just a casual reminder that Brailyn Marquez is:

Coming soon to a South Bend ballpark near you. pic.twitter.com/doZaEMqIgX

But the latest heap of praise he received from Baseball America has me especially giddy.

BA recently ranked every left-handed pitching prospect in baseball and Brailyn Marquez’s name popped up at No. 21 overall. That, alone, is worth of celebration, but is only half the fun. Each of the three BA writers who helped create the rankings picked one of the pitchers who concerned them and another who they consider “breakout prospects,” and Ben Badler, arguably one of the top prospecting minds out there, chose Marquez!

“Marquez is still a few years away, but there’s a lot to build on and signs of things moving in the right direction. His velocity has trended up, so he’s regularly pitching in the mid-90s and cranking it up to 98 mph from the left side, with a power slider that helps him miss bats. There are safer bets if you’re looking at lefties on this list, but Marquez is one of the more exciting southpaws in the lower levels.”

The Cubs have one of the “more exciting southpaws in the lower levels” of the minor leagues, and that is not something to sleep on. Because while they have a whole slew of near-MLB-ready arms at the Double-A and Triple-A level, very few of them have the sort of ceiling that can get you excited. Sure, ceilings tend to lower as prospects age and their issues reveal themselves against better competition, but you have to start somewhere, and this is not something the Cubs have had much of in the recent past.

So, with any luck, the Cubs could have a catching prospect (Amaya), a middle-infield prospect (Hoerner), and a left-handed pitching prospect (Marquez) emerging as mid-top-100 prospects by mid-season.

Marquez just turned 20 last week, and could be starting out in full-season ball this year at Low-A South Bend. Even on a conservative track, that could have him arriving on the MLB doorstep when he’s still a very youthful 22. There’s a long way to go from here to there, but it’s nice to have some ceiling on the pitching side, no?