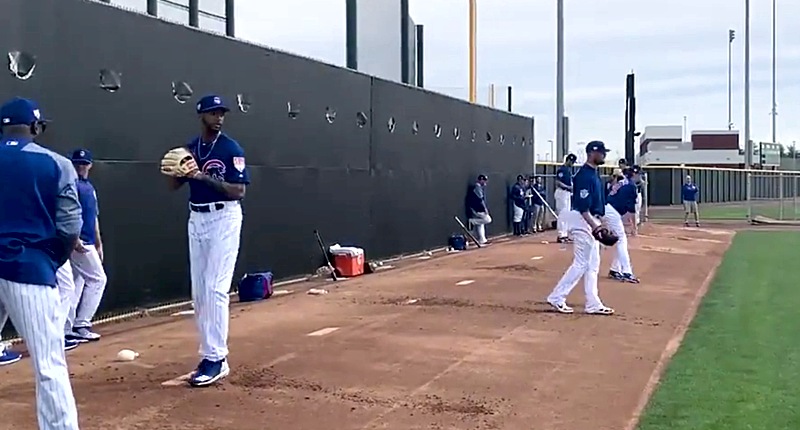 I can’t yet say whether this is a new normal for Carl Edwards, Jr., but the Cubs righty reliever is rocking a very new-looking, Clayton-Kershaw-esque delivery in his first bullpen session of Spring Training:

Side sessions for Edwards, Lester, Hendricks, Darvish, Duncan Robinson and Chatwood. Edgertronic cameras set up behind CJ and Chatwood with Rapsodo devices behind both their catchers. pic.twitter.com/ycTqzZvS29

Given Edwards’ long-standing command troubles, I’m all for the Cubs working on a mechanical method for keeping him straight, and this could have that effect. That said, dramatic changes always make me a little nervous, so I wonder if this is a teaching tool more than a permanent change?

When he’s right, there are but a handful of relievers in baseball with the stuff to equal Edwards. He can pump a high-90s fastball with natural cutting action, extremely high spin rate, and extremely good extension. The impact? A fastball that, when executed well, is essentially impossible to barrel, if you can hit it at all. Oh, and by the way, he has a devastating curveball, too.

The issues with Edwards, of course, have been his ability to actually get that fastball where he wants it. When he’s not right, batters simply spit on the fastball entirely, and sit back waiting for a curveball to hammer. If they don’t get it, then they frequently just walk.

Edwards has also dealt with a number of injury issues, including multiple shoulder problems and a forearm issue at the end of last season. He’s one of those guys whose range of outcomes for the Cubs is as wide as it gets: utterly dominant reliever … or zero impact at all.

Edwards, 27, had a very nice 2.60 ERA last year over 52.0 innings, but what sticks in the mind is his profound control problems later in the year. In September, he walked at least one batter in all but one of his 11 appearances, totaling 12 walks in just 7.0 innings. It was a disaster, and very painful to watch. Hopefully an offseason to get healthy and reset – and maybe tweak the delivery? – will get him back into the strike zone. The Cubs are going to need him.