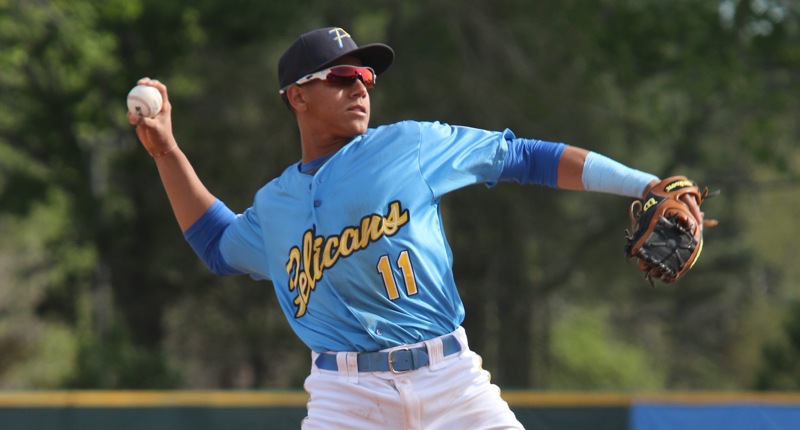 This is the part of the list where I don’t have to squint to see a Major League future. I think the question for these five, and what holds them back a bit, is if the ceiling for each is just a bit too lofty a projection. Let’s get to it.

Has: Variety. Watch two Thompson starts, and there’s no promise you’ll watch the same pitcher. It’s as if, and I can’t know this to be true, Thompson sees what pitches are working in the pregame bullpen and amends his game plan to fit that day’s stuff. He has a large arsenal to choose from. I like to say he has 6 pitches: 2 seam, 4 seam, cutter, curve, slider, change. In reality, some of those might bleed into each other, but watching Keegan this year gave me an appreciation for how he can manipulate the baseball.

Shows: Hints of Major League quality within the arsenal. In my first viewings of Thompson last April, I judged him quickly, throwing him at the bottom of my list of the early-round 2017 draft arms. But on each watch, I’d find something else I liked. In some starts, the curveball was nasty. Other starts, he’d own hitters with a high 4-seam that touched 93-95. As the year went on, his slider got better and better. Rare was the night for multiple offerings to grade highly in the same start, but he almost always had something to attack with.

Needs: Consistency. Thompson led the system with 11 starts allowing 0 runs. He was also lit up in five starts. I feel like Thompson is a guy that with developmental focus, can really blossom into a true starting pitcher. His ranking, more than any player on the list, reflects my belief that his intelligence “will just figure it out”. That being said, the development is going to require some editing, some sharpening, some work in the gym and some work in the pitching labs.

Has: True MLB up-the-middle defensive ability. I believe, for instance, despite never having played one inning at the position, that Ademan could one day blossom into a Gold Glove-caliber second baseman. His actions, his instincts, his hands are all plus-to-better. At shortstop he’s very good, although his tools are less electric than the MLB’s best at that position.

Shows: A solid, mature plate approach that should improve as he continues to grow. Ademan didn’t face a single pitch in 2018 from a pitcher younger than him, which leaves his numbers hard to judge. That he was able to show a healthy walk rate and the ability to hit the ball in every direction:

Beauty of the new MLB minor lg spray charts is we can see something the raw numbers don’t tell us. Aramis Ademan’s Pull% drop from 2017 (49%) to 2018 (45%) was relatively insignificant. But check the spray charts of his hits — a clearly more willing all fields approach. pic.twitter.com/EXnIbtUpA8

Needs: In my opinion, everything in Ademan’s instruction needs to be geared around the premise that a MLB successful Aramis Ademan would need to be an elite contact hitter. Last year, the average Carolina League hitter struck out in 21.5% of his plate appearances. Ademan was at 21%, but more, in his final 37 games that number dropped to 15.8%. The problem was that in those 37 games, Ademan hit just .185/.262/.215, spurned by a .225 BABIP that was thanks to no line drives. What Ademan needs, I think, is a significant swing overhaul. Simplicity needs to be the key, and for now, I think worrying about accessing pull power needs to be forgotten. Shorter, simpler and quieter to the ball. Get the K rate permanently under 20%, and build back up from there.

Has: A Major League fastball, thanks to a rehabilitation from Tommy John surgery that led to the strongest arm of his career. Steele throws 92-95 mph consistently, with significant spin, and saw his fastball touch 96 mph at times in Arizona last year. When Justin is commanding this pitch to a batter’s knees, it’s serious trouble.

Shows: Steele was really breaking out in 2017 just before his elbow injury, and in that season his curveball was one of the most exciting pitches in the system. In my opinion, Steele’s curve didn’t always reach those same heights last year, flashing plus but more usually sitting around average. He needs it to be excellent.

Needs: A brief story. In July, while watching a Steele outing, I noticed a pitch that wasn’t one of Steele’s usual secondaries. So I asked him about it. Justin’s response was to shake it off, essentially blame it on a change-up gone bad. Flash forward to the Arizona Fall League, and we had numerous reports (from Jason Pennini of Prospects Live, Arizona Phil at The Cub Reporter, others) that Steele was showing some kind of slider. I asked again. This time, Justin went secretive!

If Steele is going to make it as a starter, a fourth pitch will go a long way. He also will need more consistent command. But he could go the relief route, in which case we’ll wonder if the fastball can play north of 95, and just how sharp the curveball can get.

Has: Short is a microcosm of what we want in modern baseballers: patient and looking to hit the ball in the air. He is a series of superlatives. The fifth-best walk rate among all AA players. The second-fewest ground balls. The third-best OPS against left-handed pitching (.963). He tests the bounds of the Loft Angle Movement, and does so as a skinny, athletic middle infielder.

Shows: Real shortstop ability! This is a guy that Baseball America named both the Best Defensive SS in the Southern League and the Best Defensive Infielder in the Cubs organization. Video is hard to come by in the Southern League, so I can’t speak to it with significant expertise, and so I’m happy to defer to BA’s sources. We do know that Short has quick feet and a strong arm, and if it’s ultimately decided the utility route is a better fit, he should be a natural at numerous positions (CF among them, I’d think).

Needs: Contact ability is always going to be a problem, and we’re especially concerned about the long-time ability to hit good right-handed pitching. In Double-A, Short hit RHP’s at a clip of just .217/.339/.360, striking out in 29% of his plate appearances. This is only going to become more problematic, and so Short will need to make some adjustments. My advice: more early count aggressiveness.

Has: The ceiling of a cornerstone piece. The power-speed combination that is a rare thing in the sport. Roederer is short with muscle still to gain to his frame, so it’s easy to project more power on top of what he’s already shown. He has drawn comparisons to Andrew Benintendi, but I also see some of J.D. Drew or Brian Giles in there. There is a good chance that within the next 2-3 years, he’s the runaway top prospect.

Shows: What really excites me is that on top of the raw skills, Roederer had an 11.2 BB% in 37 AZL games as an 18-year-old that had an injury-shortened high school spring. His instincts at the plate are good, and if he can be the rare high school hitter to show patience out of the gate, his offensive potential will be even higher. This is the type of polish that leads me to believe he could benefit from skipping Eugene and starting in South Bend right away this spring.

Needs: Probably too much of the optimism around Roederer revolves around his first 12 games, when he hit .404/.509/.702 and reached base in each game. After that, in his final 25, he slumped to .211/.276/.347, and it reminds that this is still an inexperienced teenager. There are going to be growing pains; for example, I wouldn’t expect him to hit left-handed pitching consistently for awhile. It was just .227/.320/.273 in Arizona, and that’s the type of advancement that isn’t even on the radar right now.