The Cubs Bullpen Came With Risks - Some Are Showing, New Ones Are Developing
Search
Skip to content 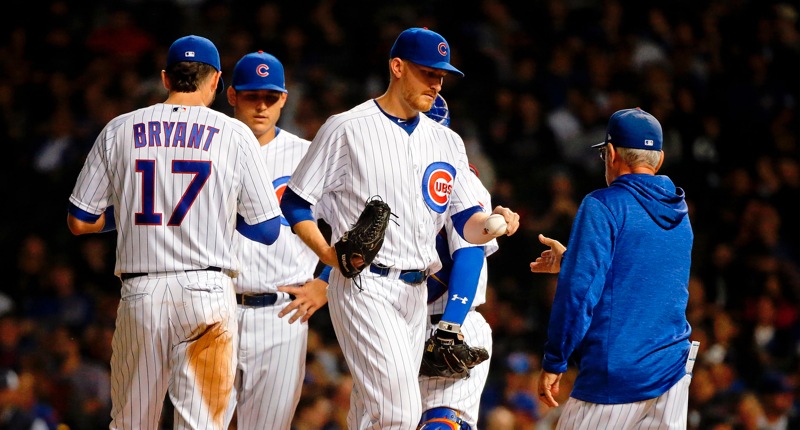 It’s not like the issues that have yielded three blown multi-run leads in the first five games of the season were absolutely unforeseeable. We were calling it a “crisis in waiting” in January, and I fear that we’re seeing the rotten fruits.

While I don’t think it would have been a good bet to predict precisely what has happened, it was pretty darn easy to see risks in a bullpen that struggled down the stretch last year, had its best arms injured or taxed, and was supplemented only by three guys who were unsigned until late in the winter and had to settle for bargain contracts (each of whom is now currently injured (Tony Barnette and Xavier Cedeño) or dealt with mono late in the offseason (Brad Brach)).

We’ve said it before: when you go with an approach to the bullpen that amounts to “here’s a 15 could-be-good options, sort out the best mix of 8”, you risk a lot of losses in the process of figuring things out. Three blown multi-run leads in the first five games of the season? Lord, even that is worse than anyone could have feared. It’s easy when you’re on the other side of it to feel like this was the only possible outcome, but even for the worst bullpens, blowing multi-run leads late in the game is relatively rare. This has been an exceptionally abysmal week.

So I suppose I should be fair and nuanced and say that it is simultaneously true that the bullpen’s predictable woes have contributed to these losses, but also these results have probably been worse than could have been predicted or even were deserved. The Cubs relievers have been bad in these three games, and they’ve also got some bad bounces (well, the first two blown losses anyway). Sometimes you’re bad and you get good bounces, because it’s baseball.

To that end, I think it’s also probably fair to share Joe Maddon’s overly rosy, but also not-totally-inaccurate perspective on the bullpen problems (how appropriate is it that this video is inadvertently sideways?):

We talk about “the bullpen” as a thing. I think that’s the right way to do it when we’re stepping back to talk about the broader issues. But it’s also true that in these three losses, for the most part, it was an individual guy having a terrible game that cost the Cubs: Carl Edwards Jr. giving up walks and a dong in an outing, Mike Montgomery giving up a couple hard shots in an outing, and Steve Cishek inexplicably losing his control completely. All three guys have been quite good in the recent past, and all three are hardly the type of “let’s see what we have” guys that you’d be testing out in a volume approach. These are guys who were going to get chances regardless of who else was in the bullpen, and if they blow a game, I guess I’m not as sure that’s a “bullpen” thing as a “these individuals had bad games” thing.

Which is not to say I’m excusing “the bullpen,” or ignoring the issues that nevertheless exist. Because the “crisis in waiting” stuff is still there, and, if anything, there’s even more to worry about now.

I guess I’m just trying to talk myself into believing that, despite those issues, this group – and the guys on the Injured List and at AAA behind them – can coalesce in time and be a solid bullpen. OK, or an average bullpen. Or at least not the worst bullpen in the history of baseball. And I’m trying to talk myself into that because I don’t think there is some magic cavalry coming. I don’t think the Cubs are signing Craig Kimbrel, and, even if they did, I’m not sure he’s ready to go until May, and at that point, I’m also not sure he’s lights out after having his typical season so deeply disrupted.

I have no idea how you manage a group in this situation. How you keep the bullpen focused and positive and forgetting about what’s come before. How you get the offense not to press, feeling like they have to score 50 runs for a lead to hold up. How you get the starting pitchers to not feel like they’re gonna have to throw a complete game every time they go out. I don’t know how you do it. I hope Joe Maddon does, because these are all now serious risks the team faces because of the bullpen’s construction and performance.

These things, too, were always among the risks of constructing a bullpen like this. Maybe the worst risks. They are the risks that can cost you a game long before the bullpen ever has a chance to blow it.