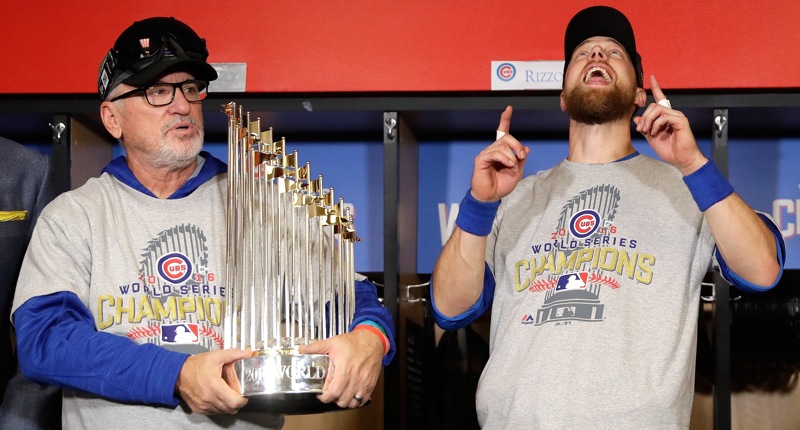 First and foremost, and with complete sincerity, I hope for the best for the Zobrist family as they go through something deeply personal in a very public way. With three small kids involved, I hope everyone keeps them in mind when commenting on the story.

But, because it definitely impacts the Chicago Cubs baseball team in myriad ways, it’s not appropriate for us not to discuss Ben Zobrist’s continued absence on the restricted list while he deals with that personal matter.

To that end, and similarly, Joe Maddon tells Gordon Wittenmyer that the team has to proceed as though Zobrist is not coming back at all: “I have to think that way, absolutely. I hope that’s not the case. But he’s at the point now where if he chose to come back, it’s going to take him awhile to get back up to speed, too. We have to mentally be prepared that we will not have him.”

It’s not as if any of us who’ve been paying attention haven’t already considered that possibility, but Zobrist feels like such a critical part of this current Cubs run that suddenly having him removed from the equation entirely would be a painful blow. Look, I know that he was not producing earlier this year, but that sample was tiny, he was obviously dealing with a lot, and he was so very good last year. Throw in his versatility and his presence in the clubhouse … that’s a potentially extremely valuable player, beyond the ways we can quantify externally.

So, yeah, it would really suck to be without him going forward.

Let’s proceed, as Maddon is, as though that’s actually going to happen, though. What does it mean for the Cubs?

In terms of the roster and playing time, there isn’t much impact given what we’ve already seen. Addison Russell and David Bote will continue to get a lot more time at second base, and the nominal three starting outfielders will see more time out there. Optimizing match-ups against opponents will be slightly more difficult. Daniel Descalso will necessarily get a longer leash to turn things around.

There is another side to this conversation, and it’s the sticky financial one. It’s important, but it’s also really fuzzy.

The longer Zobrist is out (he makes just under $500,000 per week), the more notable, even if uncomfortable, the financial side of the conversation becomes. The Cubs made no secret about just how tight the financial situation was by the end of the offseason, and it’s not even entirely clear how much money has been reserved for midseason acquisitions. There will be needs, and those needs could be addressed, in part, with money. If some of the budget is no longer being paid to Zobrist, then that is relevant to how the Cubs can proceed going forward.

Let me be very clear: I do not hope for anything in any particular direction. I don’t feel like I know remotely enough to say whether Zobrist “deserves” to be paid, or whether the Cubs would be “right” to pay him, or any of that. I have no idea. I won’t pretend to have an opinion on that side of things.

My only perspective is that of an analyst and a fan: I just kinda want to know what the plan is, so that I can have a little more context for the near-term future of the roster, and what will or will not be possible. That’s all.

Bookending this post with the most important thing: I hope things proceed and resolve as well as possible in a situation like this for the Zobrist family. The impact to the Cubs may be our primary focus because of the nature of the site, but it’s certainly of secondary importance.