Robel Garcia Has 6 Home Runs In His Last 12 Games … Now What? Skip to content 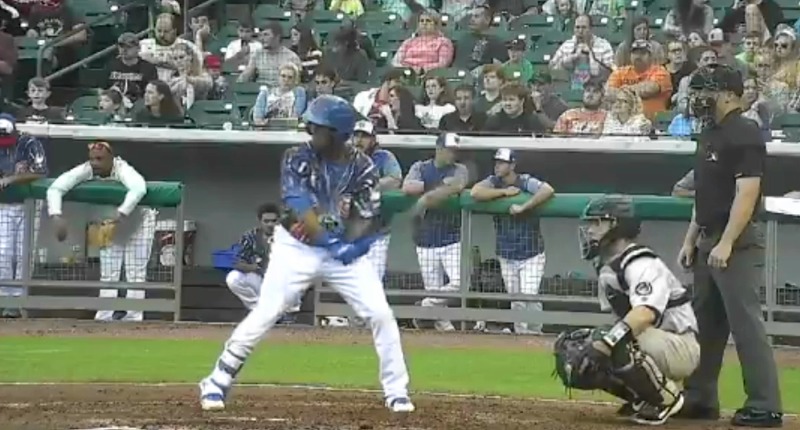 “You know, every so often someone bursts onto the scene out of nowhere. And who knows, maybe Garcia is going to be one of those finds for the Cubs.”

This was Double-A broadcaster Mick Gillespie on April 17, after Robel Garcia hit his second home run in as many days. Because of a hamstring injury on Opening Day, this was just Garcia’s third game in the Cubs organization. He’d last been seen in professional baseball in 2013. The hit that provoked Gillespie was a bomb, a change-up left up and middle-in that Garcia destroyed deep to right field.

In Arizona during a minor league Spring Training game, I took notice of Jason McLeod after a Garcia hit. He beelined to the coaches box, surely to talk about the strong kid with the impressive bat speed. Robel makes an impression.

He also keeps raising his own ceiling. At first, a sheer roster spot on a full-season minor league affiliate was a surprise. Then, an everyday job was a shocker. Then, he was the system’s best player in April, and we wondered if it could possibly be real. Then he was promoted, confirming the Cubs wanted to further test his mettle. I caved in and put him on my midseason prospect rankings. Since then, he’s exploded for his hottest power stretch of the season: six home runs in his last 12 games. He just keeps looking better and better.

We have to begin asking the question of what he is. A big leaguer? Even crazier: could he be one of the 14 best roster-able hitters if this team reaches the playoffs (Michael: Whoa, whoa whoa … slow down there … but I get it)? I know that seems crazy. But so are these numbers!

Garcia is a guy who does not hit the ball on the ground, and he uses some good strength packed in a small frame to generate plus power. He backspins the ball naturally, and it routinely carries farther than it seems off the bat. His left-handed swing is a more typical power swing, his right-handed is longer and more level-planed. However, he’s been equally dominant with both:

Personally, I find Robel very advanced in picking up spin out of the pitcher’s hand, though he’s a bit susceptible to front-door breaking balls. He has work to do on decent change-ups, a pitch he’ll see often as a switch-hitter. I’d still generally classify him as a mistake hitter, as he sees a lot of pitches and waits for the pitcher to blink, to offer him something to drive. He’s there to hit the ball hard. Major League pitchers are going to exploit him some. He’ll strike out a ton, he’ll struggle to keep that batting average above water. But his power is such to potentially make up for it. Few bench infielders around the league can offer that [insert David Descalso joke here].

Robel is signed to a second minor league contract, so without the specifics, we don’t know if he’s eligible for minor league free agency at season’s end or not. However, if he’s added to the 40-man roster, he will not be eligible for free agency, and will have three option seasons available to the Cubs. Also of note, his age: Garcia turned 26 right before the season, which means his peak is happening right now. Remember, the active roster will have 26 guys next year; and Garcia’s versatility around the infield could make him a really good fit. I’m still getting a feel for his defense, which seems ripe with mistakes, but occasionally has produced a highlight.

Currently, the only Cubs position players on the 40-man roster in the minor leagues are Taylor Davis, Mark Zagunis and Ian Happ. Any of those three’s ability to play infield is tenuous at best (plus, guys like Happ are still working on big-picture stuff anyway). I’d argue the next injury that takes place in the infield, even on a minimum 10-day basis, should result in the selection of Garcia’s contract. Yes, you’ll have to find someone to place on the 60-day IL, or even worse, someone to DFA. However, Garcia’s power upside makes the proposition worth it.

Give this guy a chance to test his mettle (and his magic). Call him up again in September. And maybe, just maybe, he’ll keep raising that bar.

SmokiesCenter 5/4 vs Jackson: Robel Garcia stays hot, as the Smokies use the force on Star Wars night. pic.twitter.com/OHbUgwOcth