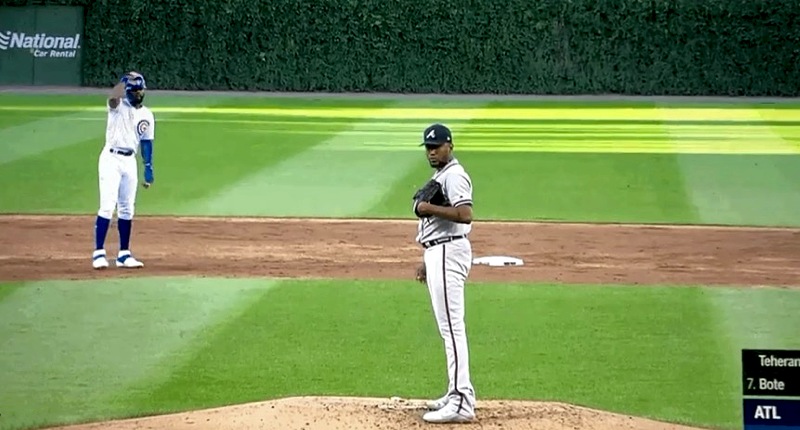 This is a great catch by former Braves pitcher Eric O’Flaherty, and a good bit of insight into how his former teammate works out at second base:

This is why Kenley Jansen purposely balked JHey to 3rd.. Even when Heyward doesn’t have the signs, he still fakes it just to be a distraction. Catching a glimpse of this when you are pitching can distract you just enough to make a mistake over the plate. Didn’t work but good try. pic.twitter.com/jTXfxjG36o

This is why he was worried about signs being relayed. If you see a runner do anything like this when you look back to second, paranoia sets in quick. Thinking about runner relaying signs takes focus away from executing pitch. With runner at 3rd you can just focus on hitter.

Remember when Kenley Jansen got fed up with Jason Heyward at second base, told him he was going to intentionally balk him over to third base, and then did? Obviously the implication was that he felt Heyward was trying to relay pitches to the batter, and given O’Flaherty’s tweet – and what he saw on video – I’d say that was spot on.

I also find it very interesting that O’Flaherty mentions the possibility that Heyward doesn’t actually have the signs stolen, and is instead simply trying to eff with Julio Teheran and get in his head. I immediately think … why doesn’t every runner at second base do this? If it works, there’s no cost at all, and you don’t even actually have to *do* anything except pretend to send some signals to the batter.

There’s also the possibility, of course, that Heyward did have the signs stolen and was actually trying to relay them to David Bote. My position on that has always been that sign stealing – with only player eyes and brain – is just fine. It’s why catchers use a series of signs with a runner on second base in the place. As long as you don’t introduce technology and/or people not on the field to help steal signs, I’m good with it being part of the game.

So, either way: good on Jason Heyward.